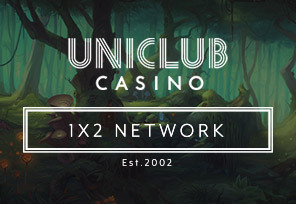 1X2 Network, one of the fastest-growing developers of top-tier and premium online slots in the iGaming industry, recently delighted its customers with its fantastic hit title Arctic Fruits. However, this popular brand has now shifted its focus to expanding its global reach even more and has signed a new agreement with Uniclub Casino. This latest agreement will allow the provider to leave its foothold in Lithuania for the first time.

This partnership will see the launch of online casino products developed by the company’s subsidiaries 1X2gaming and Iron Dog Studio on the platform of this choice number one casino.

Punters who decide to check out the offering of this premium operator will have the opportunity to get an unforgettable iGaming experience with titles from 1X2gaming and Iron Dog Studio subsidiaries. The deal includes online slots that feature Megaways

mechanics such as Rainbow Wilds Megaways

Among those online casino releases that will bring you fun and great win potential are also Jester Wilds, Book of Ba’al, and Smoking Hot Fruits as well as many others.

Kevin Reid, CEO at 1X2 Network, said:“We are excited by the opportunities on the table in Lithuania and believe our suite of slots will not only meet but exceed player expectations in the market. We are also thrilled to have made our debut with Uniclub Casino, one of the leading brands in the country. The addition of our games will allow the operator to deliver more quality and variety than before, and we look forward to seeing its players enjoy the entertaining experience they deliver. This includes our recently launched Bonus Upgrader feature that allows players to select which of the game’s bonus features they wish to buy and then play it at the level that suits them.”

Martynas Matulevičius, CEO of Uniclub.lt, added: “1X2 Network is responsible for some of the hottest slots in the market right now and we are delighted to be able to offer them exclusively to our players for the first time. It is partnerships such as this that have allowed us to emerge as a leader in the Lithuanian market and we look forward to cementing that position by continuing to offer our players content from the best developers in the business such as 1X2 Network.”

Over the past year, the developer has taken several important steps that have influenced its expansion. Namely, 1X2 Network has guaranteed certificates for key brands in the Netherlands and Denmark, and the company has left its footprint in the UK, Isle of Man, Malta, Gibraltar, Sweden, Spain, Italy, Colombia, Greece, and Germany.