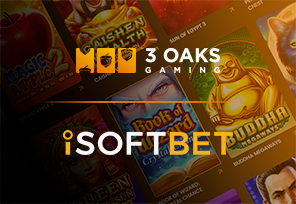 3 Oaks Gaming, one of the leading and famous casino software developers in the iGaming industry, recently expanded its business roots after the brand signed an agreement with Parimatch.

However, this time the developer put pen to paper to seal a new distribution agreement that will further improve the developer’s position in the iGaming industry.

As announced by the company, 3 Oaks Gaming shook hands with iSoftBet to guarantee an expanded distribution network.

The distribution will include plenty of famous, feature-packed, and innovative products that have proven to be one of the most popular among players around the world.

From now on, thanks to this partnership, the full games library of the game will be available on iSoftBet’s Games Aggregation Platform.

Among the titles that will enrich the offering, the platform will be the hit title Magic Apple 2 and Fish Reef Megaways

, as well as classic releases such as fan-favorite Book of Wizard and terrific 3 Coins Egypt.

Sebastian Damian, Managing Director at 3 Oaks Gaming, said: “iSoftBet is a major provider and aggregator in the industry and this is an important commercial deal for us as we look to further our footprint across regulated markets.”

Federica Faggiano, Chief Commercial Officer at iSoftBet, said: “3 Oaks brings interesting concepts to the market, be it an array of Hold and Win titles or exciting Megaways

games. We’re very excited to add them to our aggregation roster and look forward to a positive working relationship.”

3 Oaks Gaming is a Malta-based casino software developer that has secured one of the highest positions in the industry in a short time. The company was established in 2021, and as a relatively young company, it can already boast of numerous successes.

The provider recently enriched its portfolio with new, fantastic titles, including The King of Heroes.

The King of Heroes is an online slot that features a 6×4 grid as well as 4,096 ways to win. Players will be offered interesting gameplay as well as the opportunity to take advantage of several interesting features including Bonus Spins, Hero Progress, and Hero Rise.

What is particularly attractive to players is the fact that this game will offer the possibility of winning big prizes, up to 5,000x the stakes!