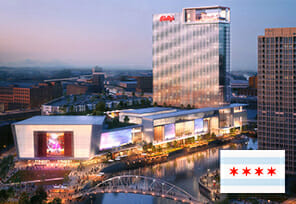 Five proposals from three companies fighting to start a casino in Chicago have been submitted for consideration to mayor, Lori Lightfoot.

The offer from Hard Rock International is being considered by city officials, whose casino would be set in the mixed-use project – One Central and it would be built over the railroad tracks west of Soldier Field. The City Hall staff members will recommend which casino plan the mayor should present to councilors for approval.

However, in the end, it will be Lightfoot that will make the decision. This decision will not be easy, given that the city is counting on tax revenue to fill the budget from which public pensions are financed.

If a majority of city council members agree with her proposal, it will be sent to the Illinois Gaming Board to vote on granting a license to a Chicago casino developer.

The mayor hopes to get the shortlisted candidate that she will present in the first quarter of next year.

Background investigations by the regulator will be conducted after the report is submitted to the board.

West of Soldier Field, Hard Rock wants to break into the casino where One Central will theoretically be located.

According to the plan, the railway yard would be covered with a platform. The platform would house restaurants and retail stores, as well as hundreds of offices that will occupy several million square meters.

Hard Rock spokeswoman Gina Morales said in a statement: ”Hard Rock International is excited to participate in the RFP process to bring our unique brand of world-class entertainment to the city of Chicago at One Central ”

To begin the One Central project, government funding of about $6.5 billion is needed. During Gov. J.B. Pritzker’s first year, the budget was approved, which opened the door to negotiations with the developer, but little has happened since then.

Pritzker’s spokeswoman, Emili Bittner, said that the main focus for administration is recovering from the coronavirus and that the amount that the developer is seeking is too much.

Two identical proposals of $1.6 billion have been submitted by Bally’s in order to build a Bally’s Chicago casino.

The first offer is at the Freedom Center site while the second proposed site is the 28-acre parking lot south – the McCormick Place Truck Marshaling Yard.

This proposal is already facing trouble because of Ald. Sophia King, who said that people in the Bronzeville neighborhood do not like this idea at all!

The owner of 4 casinos, Rush Street Gaming, has partnered with 2 different developers on separate proposals. Of course, the word is about to build a Chicago casino, but at McCormick.

“We think this is a perfect adjunct to what’s already there,” Scott Goodman (founding principal of Chicago-based Farpoint Development) said. “Things are already in place, not least of which is the structure, but also other infrastructures, such as parking and access, and ways for people to get there.”

Rush Street collaborates with Related Midwest on a casino at The 78 as well as with the Chicago River in the South Loop.

Related Midwest President Curt Bailey said, “It would work extremely well and probably produce the highest-income casino in the city of Chicago because of the location.”

The post 5 Proposals from 3 Companies to Run Chicago’s Casino first appeared on RealMoneyAction.com.