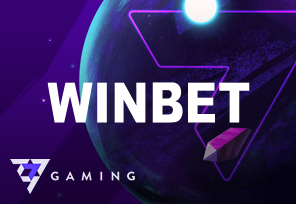 7777 Gaming, one of the big names in the iGaming industry known for its innovative, content, has decided to further confirm its presence in Europe by launching its content on the platform of a new partner.

The brand announced its debut on the Bulgarian market just a few days ago, joining forces with Inbet, which marked an important milestone for the developer.

However, to strengthen its position in Europe, as well as in this market, the company enters another partnership.

7777 Gaming shook hands with another leading operator in Bulgaria to enrich the new partner’s platform with new titles.

The provider proudly announced that the brand has merged with Winbet!

As stated in the contract signed by both parties, 7777 will supply its new collaboration with an array of amazing, feature-packed, and some of the most sought-after products in the industry.

The integration will include over 40 fantastic online casino products such as Sea of Treasures, Jinn, Super 7777, Golden Scarab as well as much more!

Also, Winbet’s platform will be enriched with recently launched slots including Cash 40, Greenhats’ Jackpot, Gingers, and Gems, Hit the Pinata, and others.

Elena Shaterova, CCO at 7777 Gaming said: “Winbet has established a name of a leader in Bulgaria. Our partnership adds another level of excitement to the Winbet audience and is incremental to our success as a B2B iGaming provider on the market. We move fast on the European market with many new deals coming their way.”

Victor Perenovski, Operation Director at Winbet commented: “We always strive for progress, differentiation, and innovation. That is what we find in the 7777 gaming portfolio of games. We believe our players will enjoy a well-selected and diverse game concepts, which is another reason to add 7777 gaming to our offering. It’s the start of a fruitful and beneficial partnership between both companies.”

7777 is one of the popular B2B brands that has established itself as one of the leaders in a short time. The headquarters of the company is located in Sofia, Bulgaria. The brand’s portfolio consists of various interesting and engaging online casino products such as instant win games, slots, table games, themed releases, iLottery, sport iLottery, scratch card, jackpot solutions, as well as several other tools and systems.