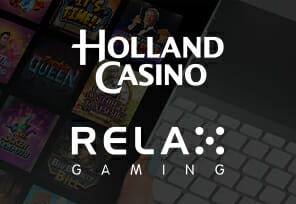 Relax Gaming (RG) and Holland Casino have officially entered into a partnership. It’s no surprise the leading provider is moving forward with the casino brand, having recently been nominated among the top 10 to get its license!

There are currently 14 land-based casinos operating in the Netherlands, which is a solid number; but let’s not forget to mention that the first casino they opened was in Zandvoort on October 1, 1976. Now, a few decades later, punters can enjoy the entire RG library. Great progress, don’t you think?

The products will surely attract players from The Land of Tulips, which will put these suppliers in a solid position in the market. This agreement will be in accordance with the regulations of the state itself.

Jeroen Verkroost, Digital Transformation Director at Holland Casino, said: “Relax’s reputation for business simplicity and efficient integration have made it a platform we have been eager to integrate with for quite some time. We have great expectations for this partnership and know our customers will be big fans of the range of engaging and market-specific online casino content that is already live.”

As a customer friendly company, RG offers its partners more than 2000 online casino games that many punters have been waiting for.

In addition to its own highly listed slots, Relax has also singled out third-party content, and the possibility of doing so is given to it by already concluded partnership programs.

The supplier’s chief operating officer, Daniel Eskola, thinks that this is a great success for the company, considering that Holland Casino is one of the most popular in the Netherlands. He adds that the cooperation is proof of the quality and diversity provided by their platform.

Holland Casino has the great privilege of doing business with this developer, which with its diligent work won the title of Unique Gaming Company of the Year at the British International Gaming Awards in September.