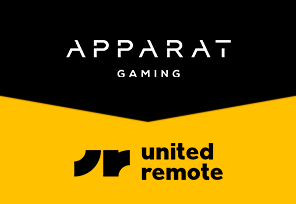 Apparat Gaming, one of the fastest-growing B2B brands in the iGaming industry, has announced that it has signed another significant deal with a famous operator.

The brand recently expanded its business reach after shaking hands with Relax Gaming. This Powered by Relax partnership will enable the developer to launch as many as four of its titles on the platforms of German operators.

However, the new deal will provide an opportunity for Apparat Gaming to further expand its business scope by introducing its portfolio to even more operator platforms and key markets.

As agreed between the provider and United Remote, Apparat will distribute its outstanding portfolio on the platform of this operator.

United Remote’s games library will be enriched with various incredible slots, including those with a German accent.

The new handshake is just an improvement of the already existing collaboration between these two brands.

Namely, United holds a license issued by the Malta Gaming Authority, from which the developer took advantage to launch its first two products Pharoah Princess and Fruit Storm during the last year. In the meantime, its partner, which recently expanded another partnership with Pariplay, has guaranteed approval from these competent authorities.

From now on, punters who choose United will have an exclusive opportunity to try various provider’s terrific titles, in addition to the fantastic titles of well-known providers that this platform features.

The distribution will include fan-favorite titles including Total Eclipse, soon-to-be-launched 40 Sevens as well as many others.

These slots will amaze you with their interesting and dynamic gameplay as well as their popular features.

For example, the Total Eclipse will present you with a mix of the classic fruit-themed online slot with a combination of the innovative Hold-and-Respin feature.

Thomas Wendt, Co-founder, and Director of Apparat Gaming, said: “We have been working with United Remote for many months now, so it made sense to join forces with them as our first game aggregator partner. United Remote has partnered with leading B2B and B2C businesses and brands, so it is great to see our games line up alongside those from tier-one developers and to now be available to the popular sportsbook and casino brands in key Malta markets.”

Eliana Mennonna, Product Manager at United Remote, added: “We are always looking to add quality content to our portfolio and in Apparat Gaming we have a partner that delivers this quality but also a unique player experience thanks to its approach to creating games with a German accent. This is a great partnership for United Remote, but most importantly for our operator partners and of course their players.”