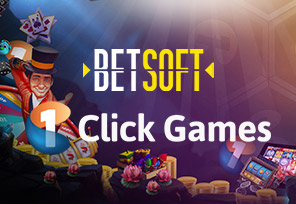 Leading producer of US-friendly online slots Betsoft Gaming has announced the extension of its fruitful partnership with 1Click Games, a Latvia-based developer of premium casino and betting white-label solutions. 1Click Games will continue to offer Betsoft’s award-winning portfolio of 200+ slots, including the most recent releases and in-game promo tools.

Just a day after Betsoft revealed the renewal of its partnership with Soft2Bet, one of the prominent online gaming operators and platform providers across Europe, the company confirmed that 1Click Games will further host its mobile-led library of state-of-the-art casino slots.

Besides numerous long-time favorites, the newly signed deal includes two latest smash hits: Lost Mystery Chests, which was launched in February, and Primal Wilderness premiered in March. In addition to that, all operators who are part of the 1Click Games network will be able to take advantage of the in-game promo tool Take the Prize

“Betsoft is a well-known brand across the industry with universal appeal. We are always looking to extend our reach, so partnering with a dynamic business development company like 1Click Games is a very positive move. We are looking forward to working further together”.

“Gaming content is what gives us a competitive edge. Working with a provider of Betsoft’s standards and reach is very good news for us and we anticipate a continued successful integration of their content”.

The extension of the partnership with 1Click Games is the latest event in the series of deals signed by Betsoft as part of the company’s strategy to reinforce its presence in new regulated markets. On April 6, the world-famous slot maker also successfully renewed its cooperation with Soft2Bet, a multi-license operator that boasts a portfolio of ten quality casino and sports betting brands.

Commenting on the deal, Anna Mackney who joined the Befsoft Gaming team last year stressed the brand’s commitment to extending its presence in Europe, as well as to the further growth on a global scale. With a raft of first-class games and consistent provision of new releases including sequels and series, this software developer is a source of a guaranteed draw for casino operators.

It is also worth noting that Betsoft is well known for the excellent RTP of its titles, a range of innovative mechanics, and a rich choice of advantageous bonus features. All of the aforementioned elements combined together make the brand a universal favorite, and it comes as no surprise its new releases are eagerly anticipated by players and the industry alike.