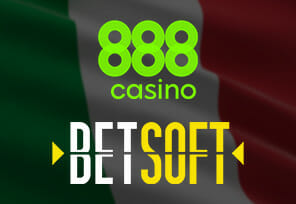 In the iGaming industry, we often see agreements between providers and operators, and the latest is between 888casino and Betsoft Gaming. From this deal, both companies and their players will benefit. 888, the Italian platform will provide access to Betsoft content and their first-class titles for the first time!

By agreement, through Pariplay, which recently announced Dutch market entry, Betsoft’s library of releases will be launched on the Italian market. This progress will allow Betsoft to expand further and present its games to players across Europe.

Some of the latest releases that will be available to players are classic slots such as the famous Red Dragon series, Take the Bank, but also Stacked, Safari Sam 2, and Lava Gold.

Anna Mackney, Head of Account Management, Betsoft Gaming, said: “Our releases are second to none in terms of cinematic quality gamification and potential payouts. Players actively search us out by the brand. We are delighted to be reinforcing our presence in the very important Italian market with a responsible and committed partner such as 888casino.it.”

Talya Benyamini, VP B2C Casino at 888, added that they are thrilled to be able to expand their friendship with Betsoft to offer Italian players its high-powered and first-class titles. They are looking forward to the continuation of future cooperation.

A Look at the Development Timeline

Betsoft possesses several senior experts on its team, such as experienced account managers, engineers, software developers, game designers, graphic artists, 3D animators, and marketing specialists. In addition to casino management platforms, its extensive catalog also includes cinematic 3D games. The company was founded in 2006, its first slot was released in 2010, followed by First ToGo (2011), and the acquired Class 4 License was obtained in 2014 by the Malta Gaming Authority. The series of successes continues in 2016 with Shift (Moved from flash to HTML) and in the same year it entered the Italian market via approval and certification from AAMS. Last but not least, in 2018, it was awarded a Class II license from the Romanian Gambling Office.

The post Betsoft Launches its Portfolio to Italy in Partnership With 888casino first appeared on RealMoneyAction.com.