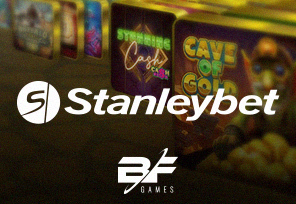 BF Games, one of the well-established and prominent iGaming content providers in the online gambling industry, decided to seal 2022 with new steps that will further improve its position among the leading companies.

Just a few days ago, BF further expanded its global reach and presented its content in one of the leading regions in the industry! The developer is proud to announce that the brand has joined forces with the well-established operator, Meridianbet.

Now, it is teaming up with Stanleybet!

BF Games announced that it has once again strengthened its presence in Romania and entered one of the leading markets in this region via the recent arrangement.

As these two giants announced, the developer will supply Stanleybet with a wide range of popular content that will delight Romanian players with engaging features, dynamic gameplay, and interesting themes.

The operator’s offering will now be expanded with several fan-favorite online casino releases including the hits Buffalo Trail Ultra™, Wild Jack Remastered™, Cave of Fortune™, and Book of Gates™ as well as its classic hits such as Stunning Hot Remastered™, Energy Fruits™, and Hot Sunrise™.

Commenting on the deal, Claudia Melcaru, Head of Business Development at BF said:“We’re thrilled to have signed this deal with Stanleybet.ro and are excited about beginning the next stage of our partnership as we both continue to grow in the Romanian market. We’re always looking to extend the reach of our titles, and we look forward to an exciting future with Stanleybet.ro.”

This deal comes after several successful and promising partnerships that BF Games concluded in the previous period.

The developer joined forces with Favbet just some time ago and thus once again made its content available to Romanian players.