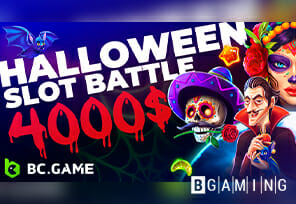 BGaming has joined forces with BC.GAME to celebrate Halloween. As part of the festivities, they have prepared a special tournament for customers with a total prize pool of 4,000$! The slot battle has started and will continue until the 2nd of November.

If you join the tournament, you will have a chance to play only Halloween-inspired slots with the spookiest themes. Included are four BGaming releases: Lucky Dama Muerta, Candy Monsta, and Fruit Million. Halloween Edition as well as Spin and Spell slot.

BC.GAME players will also have access to the tournament during the promo week. Those who are successful in getting the highest multiplier in any of the games mentioned above will win one of four prizes of 1000$. BGaming and BC.GAME are working hard to provide players with regular winnings. Every winner in this Halloween deal will be unique.

BGaming and BC.GAME have secured a promising partnership. The philosophy of both platforms is similar as they aim to excel in the crypto area. Established in 2017, BC.GAME is a widely popular project that accepts more than 30 cryptocurrencies.

“As an iGaming studio aimed at providing a vivid experience for players, we pay special attention to joint promotional activities with operators. We are glad to see exciting tournaments and we are always looking for new opportunities to make the players’ time spent in the casino more and more exciting. We’re on the same page with BC.GAME. I’m sure we will delight players with many more tournaments in the nearest future”

BGaming has just unveiled another edition of its Fruit Million slot. This time, the slot has changed its skin by transforming into a Halloween-themed game. Players can gather all the winning combos that are placed in the game, and there are one hundred of them! Wild symbols expand on the entire reel and make the experience easier.

Fruit Million is the original “chameleon” title in BGaming’s portfolio. It changes its look over 5 times per year while sharing the festive atmosphere of different holidays such as Christmas, St, Valentine’s Day, and Halloween. After the festivities, it reverts to its original look.

BGaming is a cutting-edge iGaming content distributor that blends a passion for gaming with significant expertise in the sector. It works regularly on the creation of casino content and its suite includes 60+ games such as video slots, video poker, lottery, card, and casual titles which stand out with HD graphics and a seamless user interface.