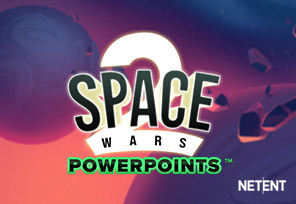 Nine years after the debut of Space Wars

, wreaking havoc across distant galaxies and fighting for that legendary space crystal. However, players are well equipped with a plethora of powerful bonus features designed to boost their chances of winning the intergalactic war.

From a groovy disco party straight out into space – with NetEnt, life is never boring! Space Wars 2

From Blasters, Zappers, and Bombs to the well-familiar Avalanche feature and, of course, the brand new Powerpoints

mechanic able to generate cosmic wins. Regardless of whether you fancied the original game from 2013 or not, you’re gonna love this high-volatility sequel enhanced with extremely engaging and rewarding extraterrestrial twists and turns.

“This game has it all – an epic intergalactic showdown, fantastic characters, thrilling graphics, and features that make each spin an adventure. The original Space WarsTM found a special place in players’ hearts and we’re excited to be launching the sequel this year.”

NetEnt, an iGaming giant that at the end of 2020 was acquired by Evolution, has never made “plain-vanilla” online slots, letting players benefit from a wide range of bonus features. Space Wars 2

is not an exception, what’s more, the team definitely went the extra mile to create a true action-packed blockbuster.

…are what makes the space rocket fly at lightning speed. Available in the base game and free spins, they are awarded for every win, being added to the dedicated collect meter at the top of the reels. Filling up the meter means moving up the levels to take advantage of an even higher win multiplier and pocket an impressive prize.

Players also need to watch out for a great many special symbols such as Blasters, Zappers, Bombs, and, naturally, wilds that come with a multiplier of up to 25x! When certain features are combined, players have an opportunity to net out really hefty wins, the range of possible combinations includes three options: Zapper + Bomb, Zapper + Column/Row Blaster, and Bomb + Column/Row Blaster.

Free spins are activated when players collect at least 1000 Powerpoints

earned, the greater number of spins are awarded. During the feature, the number of rows expands to 8, making more room for triggering additional free spins.

“It’s back! The journey continues with the launch of Space Wars

The post Blast Your Way Through the Final Frontier with NetEnt’s Space Wars 2™ Powerpoints™ Slot first appeared on RealMoneyAction.com.