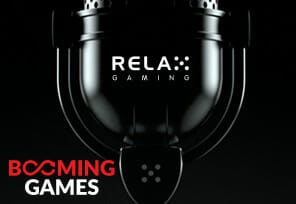 Well-known casino software developer, Booming Games, has partnered with Relax Gaming (RG) to bring its wide portfolio to the Powered By Relax programme.

RG’s operator partners will now have access to some of Booming’s most famous hits such as Cash Pig, Burning Classics, and Buffalo Hold & Win, including the rest of this developer’s HTML5 releases (over 60).

In the coming period, Booming will be available in some of the most well-known regulated markets in the iGaming industry, including those in Sweden and Italy as well as other markets licensed by the Malta Gaming Authority and the UK Gambling Commission.

Frederik Niehusen, Chief Commercial Officer at Booming Games, said:“Debuting our products on Relax’s well-regarded platform is a real milestone for us in terms of exposure. It’s going to make sure that we rapidly get our games in front of all the right operators, several of which we know have been keenly anticipating us getting the agreement over the line.”

Simon Hammon, product director at RG, also commented and said they are thrilled to be partnering with Booming Games. He adds that this is a developer whose titles are craved by Relax operators in order to provide its players with Booming Games’ releases. As he stated, this is another powerful addition to the Powered By Relax family.

Booming Games was founded in 2014, and so far, has between 50 and 200 highly educated professionals making up its team. The head office of this company is in the Imsida Central Region. The provider is licensed by the Malta Gaming Authority, and the license is also guaranteed in the United Kingdom by the UK Gambling Commission.

Some of the most famous games from this supplier include Money Moose, Rhino Hold And Win, Greek Legends, Buffalo Hold And Win, Danger Zone as well as many others. Late last year, Booming entered into a collaboration with some well-known brands such as Blox Limited, Slotegrator, SKS365, etc.

The post Booming Games Slots Part of the Powered by Relax Programme first appeared on RealMoneyAction.com.