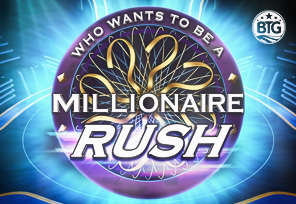 Big Time Gaming, a famed inventor of Megaways and other innovative online slot mechanics, has announced the launch of Millionaire Rush

, a MegaClusters game that features a brand new MegaTrail engine and a host of random bonuses.

Are you ready to take the hottest seat and spin for life-changing prizes? With a maximum win of 55,060x bet, an RTP of 96,44%, and an array of advantageous modifiers, this high volatility game show has a lot to offer to every style of a player.

A Brand-New Take on a Fan Favorite

After the original Millionaire slot enhanced with Megaways and its MysteryBox and MegaPays successors, BTG introduces a brand new version of the universally popular show. Called Millionaire Rush, it features a ground-breaking MegaTrail mechanic that boasts 12 rungs of bonuses that are randomly selected for each spin.

“Millionaire Rush is a fast-paced reaction game that introduces MegaTrail. With each spin, the game produces a brand new MegaTrail where each rung bonus is unlocked with each reaction for some incredible big win action! Millionaire Rush has infinite combinations keeping players on the edge of their seats, especially in the Free Games where the ladder can be set up for maximum potential with up to 99 free spins.”

The latest addition to the exciting Who Wants to Be a Millionaire family of games is a MegaClusters slot, which means that the initial 5×5 grid can grow to contain up to 100 symbols. As already mentioned, it is a high volatility title with an impressive winning potential of 55,060x stake, the latter may be anything between $0.20 and $20, letting players easily find their perfect fit.

Who Wants to Be a Millionaire?

Big Time Gaming is famous for its mastery of creating thrilling reel mechanics, as well as for combining them to offer a one-of-its-kind player experience, for instance, like in Star Clusters Megapays launched in April. However, Millionaire Rush is the first online slot from BTG to feature MegaTrail

, an absolutely new reel engine with 12 rungs of random bonuses.

Here is what to expect from the dozen of advantageous modifies that can be triggered at random at every spin:

As for free spins, players need to reach Rung 7 to trigger the feature and enjoy 6 treats on the house. During the bonus, the enhanced version of MegaTrail is used, offering a top prize of 2,000x bet instead of the 1,000x bet available in the base game.