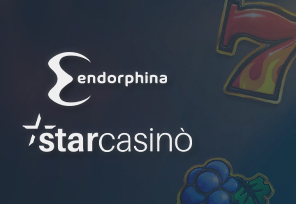 One of the most popular entertainment companies in the iGaming industry, Endorphina, will certainly leave behind a very successful year in which it presented numerous fantastic releases but also concluded several partnerships!

Thanks to collaborations, the brand strengthened its presence in the industry and guaranteed an even more enviable position. One of the most recent ones saw the handshake between the provider and the incredible operator Superbet and the strengthening of the presence of the brand in Romania!

The deal between these two giants will see the launch of Endorphina’s acclaimed online casino games on the new partner’s platform!

Players from Italy can access the StarCasino platform and gain access to some of the most popular online games equipped with engaging features, big wins, and much more!

Zdenek Llosa, Senior Partnership Manager at Endorphina shares a few words on the new partnership: “It gives us great pleasure to extend our partnership with Betsson Group StarCasino in Italy, as we consolidate our presence in more regulated markets worldwide. Being in one of the top markets in Europe, we are very excited to have reached another milestone for our games as more players will enjoy our exclusive package of games certified for Italy. We are very much looking forward to working together with StarCasino.”

Marco Strazzulla, Gaming Manager at StarCasinò, added: “Given Endorphina’s reputation for developing outstanding slots for over 10 years, it is strategic for us to introduce their content in Italy. We are very pleased to bring their games on board for our players and looking forward to having them live on our site.”

This is just one more in a series of successful collaborations that were concluded in December.

The partnership with StarCasino was preceded by a deal with one of the most popular B2B brands in the industry, Staryes.

All the mentioned agreements, but also many others, contributed to Endorphina becoming one of the leading suppliers on the global market, and we believe that 2023 will bring more surprises!

“ENDORPHINA PARTNERS UP WITH STARCASINO IN ITALY!’’, endorphina, December 21, 2022.

The post Endorphina Establishes Foothold in Italy with StarCasino! first appeared on RealMoneyAction.com.