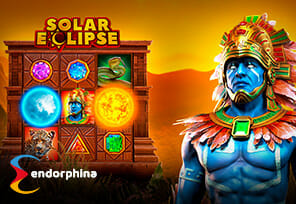 Endorphina, a well-known supplier in the iGaming industry, gives you the opportunity to discover all the charms of the moon and sun in the new online slot – Solar Eclipse.

The grid is located between ancient buildings surrounded by green leaves and trees that sway in the wind. It is consisted of 3 reels and 3 rows, which is very unusual considering that we almost never meet such a layout.

Low-paying symbols are in the form of precious diamonds in green, blue, red and purple. High-paying ones are in the shape of a snake, tiger, and an ancient figure.

This adventure game contains 5 paylines. The theoretical Return to Player of this release is 96.04%.

The Moon and Sun are Wild symbols and during the game will help you create more winning combinations by substituting all symbols – low-paying ones as well as high-paying ones.

The random symbol will be chosen at the beginning, and it will be able to expand during the game. It will expand if there are enough special expanding symbols on the grid at a given moment to conclude a winning combination.

Endorphina, which recently launched Hell Hot 20, is a well-known casino software developer based in Prague, Czech Republic. The company employs between 50 and 200 highly educated professionals, and this developer is known for its diversity. The supplier has also been tested and certified by iTech and GLI. The company was founded in 2012.

Some of the well-known slots from this provider include 3 Thunders, Scary Game – Hell Hot 20, Magnum Opus, and many others, and the company entered into a partnership with Betsson Group and Aresway this year.

Last year was also successful for the brand when it comes to expansion. The company has expanded its business network to the Croatian market after guaranteeing a Romanian gaming license.