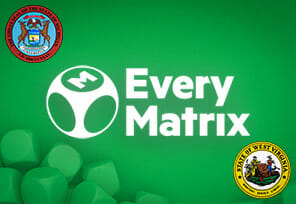 EveryMatrix, the leading company for the development of API-driven products, announced that it has applied for two new licenses – in West Virginia and Michigan.

The move comes after the provider progressed its development by fulfilling conditions necessary to obtain a license in New Jersey and then applied for two more important licenses in West Virginia and Michigan. The brand also announced that more requests for even more licenses would be submitted soon.

All of this has been contributed to by new laws passed in West Virginia and Michigan regarding online casinos. The new laws have made these two markets very business-friendly, which suits EveryMatrix and its future customers, including the company’s in-house full turnkey platform.

The new license would further expand the supplier’s business in the United States. Recall that this developer recently signed an agreement with Tier-1 operators such as Kindred Group and Resorts Digital. However, in addition to these operators, the brand has partnered with highly regarded payment providers including PXP Financial and Nuvei.

Erik Nyman, President EveryMatrix Americas, comments: “To support our business advances and multi-state partnerships, we have now filed license applications in West Virginia and Michigan. This follows our clear path and ambition to be live with our technology and products in states that allow for a full casino and sports betting offering. I am very pleased with EveryMatrix’s progress in the U.S. and looking ahead to an exciting 2022.”

EveryMatrix is known for its API-driven products that are great for casinos, sports betting, payments, etc. The company boasts its product library including CasinoEngine, OddsMatrix, MoneyMatrix, GamMatrix, PartnerMatrix, as well as RGS Matrix.

The provider was founded in 2008 with its headquarters in Sliema. Since then, it has employed between 500 and 1,000 highly educated professionals who have worked hard to bring it to the top of the iGaming industry.

Recent partnerships the company has made include BGaming, Big Wave Gaming, Nuvei as well as many others. Also, last month, there was a change in the structure of the company when EveryMatrix appointed Greg Ivry as Business Development Manager for its Miami office.

The post EveryMatrix in the Race for Two New Licenses – West Virginia and Michigan first appeared on RealMoneyAction.com.