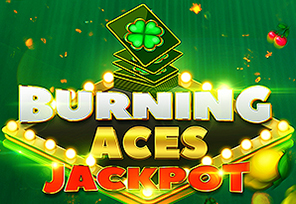 Evoplay, one of the world’s largest software providers, presents its latest title, Burning Aces. Jackpot, enhanced with Jackpots and powered by its powerful Spinential game engine!

It is a classic 5×3 online slot with 5 paylines and easy gameplay, and the sequel to the original Burning Aces released earlier this year.

The regular slot symbols are divided into two groups. Low-paying symbols are lemons, plums, oranges and cherries that can bring you up to 20x the stakes for a winning combination of 5.

High-paying symbols are represented by bells, grapes, watermelons and red lucky 7s. The latter is the most valuable symbol and brings 600x the stakes for 5 of a kind.

What about the special symbols?

The first special symbol is, of course, the wild symbol and it can appear on the second, third and fourth reels. It substitutes for all symbols except scatters and, when part of a winning combo, it expands on the whole reel!

There are two Scatter symbols in this classic slot. The first is the Diamond scatter which can land anywhere on the reels and it can bring up to 100x the player’s bet.

Star Scatter, on the other hand, appears on the 1st, 3rd, and 5th reels and brings 20x the stakes.

And each Jackpot level is presented by a card suit – diamonds, clubs, hearts and spades. The jackpot feature can be randomly triggered – the higher the player’s bet is, the better the chances of entering the feature are.

Commenting on the game, Ivan Kravchuk, CEO at Evoplay, said: “We’re pleased to offer another fantastic slot to our loyal player base, with the latest game themed around the exciting world of Las Vegas.

“The exciting sequel now features captivating progressive jackpots, which supports the player’s journey towards big rewards and guarantees an increase in player engagement and retention.”

Evoplay recently presented its online casino release called The Greatest Catch. This fantastic slot offers players the opportunity to win up to 10,000 the bet.

It comes with a fantastic gameplay and the biggest prize is €750,000. Stunning, right?

The RTP of the slot is 96.09%, which is in line with average, while the volatility is medium/high.