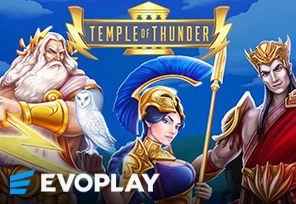 Evoplay, one of the most famous casino software developers who recently partnered with ORYX Gaming has now taken another important step in terms of expanding the company. Namely, this popular developer takes players on a trip to ancient Greece to explore mythology together and meet the Gods.

Temple of Thunder presents you with a grid located in front of a Parthenon Temple, and it consists of 5 reels, 3 rows, and 243 ways to win. This high volatility game will, in addition to an unforgettable iGaming experience, bring you the opportunity to win big prizes! The theoretical Return to the Player is an average of 96%.

This forward-looking developer has prepared three types of symbols for you including low-paying ones that are card-themed (A, K, Q, and J), medium-paying ones (4 types of creatures in green, blue-purple, and brown) as well as high-paying ones that include Gods Olympus, Athena, Zeus, and Hades.

The Wild symbol is presented in the shape of the letter W and will help you create more winning combos and thus guarantee even more valuable prizes.

What is interesting about this online casino title is that it features a Betways mechanic. This mechanic will supplement symbols in any field on three or more adjacent reels.

However, that’s not all!

This online release contains a sweeping hurricane, an innovative feature that will make the reels become synchronized. The Reels synchronization will see connecting two adjoining reels but can also be extended to include three or more additional reels.

Commenting on the launch, Ivan Kravchuk, CEO of Evoplay, said:“We’re excited to offer yet another story-driven title, with the latest release taking inspiration from the enchanting world of Greek mythology. The latest title takes our offering a step further, with Temple of Thunder featuring the popular Betways mechanic, giving players every opportunity to win big. Temple of Thunder is powered by Evoplay’s world-class game engine, Spinential, which produces 10x faster load times, an enhanced UI, autospin feature and game history mobile bar, allowing players to track their success.”

Evoplay is one of the leading iGame providers established in 2017. The company is headquartered in Limassol, Cyprus.

This popular developer has taken many important steps that have drastically contributed to the expansion of the company. The latest deal video is a handshake between Evoplay and Bragg Gaming Group’s ORYX Gaming. Thanks to this agreement, it will further expand its global reach by launching its portfolio on ORYX’s distribution platform.

Clients can find the products of this brand on the websites of well-known operators in countries such as Malta, Croatia, Romania and Serbia.

It boasts many approvals from the authorities including the latest green light issued by the Malta Gaming Authority.

The post Evoplay Unveils Another Ancient Greece Experience Through Temple of Thunder first appeared on RealMoneyAction.com.