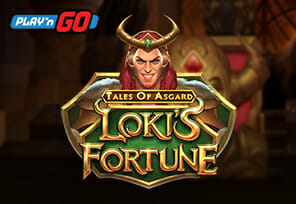 Based on the theme of the Marvel movie, the latest Play’n GO slot brings us an exciting adventure where we will witness a fight between two brothers. Who will sit on the throne and rule Asgard? Loki or Thor? Play to find out!

Symbols and Ways to Win

At the beginning of the game, you will be greeted by a short speech by Loki, which will end in his kingdom. In front of his throne will be a grid made of 5 reels and 5 rows, which we can very rarely find in slots. The fight for the throne will be accompanied by tense music. Low-paying symbols denote red, blue, purple, and green Viking Runic tiles, medium-paying ones include a snake, horse, wolf, and raven, and the highest-paying symbols are Odin and Thor.

The possible 3,125 ways to win can be multiplied to an impressive 100,000 payways, which will give players a better chance of winning! The maximum win that awaits you in this game is 20,000x your stake! Amazing, impressive, tempting!

Head of Games, Charlotte Miliziano, said: “Our Norse Mythology series is a favourite amongst players. We’ve already explored narratives with Odin, and Thor is renowned, so we really wanted to delve into the relationship between Thor and Loki. We also thought this was a great game to utilise Dynamic Payways as it mirrors the theme of Loki’s magic, splitting payways, and adds even more pace to this epic game.”

Special features that appear in this title are mystery symbols, modifiers, and free spins. When 3, 4 or 5 Emerald Scatters land on the grid you will win 8, 12, or 20 free spins. However, Emerald Scatters will not appear in the free spins round. In this regard, we can conclude that free spins cannot be retriggered. Loki, the main character will be the Wild symbol. In Play’n GO’s Norse Mythology series this is the first time we see Loki taking on the role of the main character.

This title was preceded by hits such as Snakebite, Muerto En Mictlan, Alice Cooper and The Tome Of Madness and Sparky & Shorts.

The post Fight for the Throne in Tales of Asgard: Loki’s Fortune Slot from Play’n GO first appeared on RealMoneyAction.com.