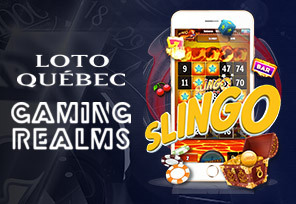 Gaming Realms, one of the fastest-growing developers and content licensors in the iGaming industry, has decided to expand its business roots even further via a deal with Quebec government-owned operator Loto-Québec.

The new agreement reached between the two companies will see the launch of the developer’s Slingo Original mobile games in this Canadian province, which will further expand the supplier’s global reach.

As announced, popular titles from this collection will be included in the distribution. Players who decide to check out Loto-Quebec’s platform will be able to try out the iconic Slingo Extreme and Blackjack Xchange at first, while the rest of the portfolio will be available later this year.

If we look at all the facts, it’s obvious that this is a big step for both brands. With the launch of its Slingo Original collection in this Canadian province, Gaming Realms will further expand its business scope to another key market, which will have a positive impact on its position in the iGaming industry.

On the other hand, this Canada’s first Lottery Corporation will drastically expand its offering with some of the highly sought-after and engaging titles that will attract more punters but fulfil the needs of old clients.

Speaking about the new partnership, Mark Segal, Gaming Realms ’chief financial officer, said: “Hot on the heels of being awarded our Ontario igaming license, we are delighted to have gone live with Loto-Quebec. 2022 is set to be an exciting time for the company as we move to establish a strong foothold in the Canadian market and work towards our longer-term plan of expanding further into the North American market. ”

Stéphane Martel, Loto-Québec head of products and innovation, added:“Gaming Realms’ games are a great addition to our growing online casino game portfolio. Our players will enjoy this new offer.”

More on the Operator

Loto-Québec is a state-owned company that appeared on the iGaming market in 1969. The brand is headquartered in Montreal, Quebec, and its offering is made up of plenty of casino and lottery products. At Loto-Québec’s casinos, players can enjoy their favorite titles in as many as 38 languages!

The operator is constantly working to improve its portfolio thanks to partnerships with world-renowned brands. Namely, it recently signed a deal with Evolution, premium developer of live casino content, to expand its offering with the addition of Dual Play Roulette and Baccarat.