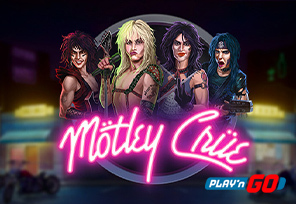 Play’n GO, one of the most popular companies in the industry, has decided to take you to another wild eighties party where you will dance to the greatest hits of the popular heavy metal band – Mötley Crüe!

What an adventure! The developer decided on this move after its recently released music-themed casino titles *NSYNC Pop and Lordi Reel Monsters experienced great popularity among players across the globe! It seems that music is an important factor in a good party!

The band will be located on a grid that is made up of 5 reels, 4 rows, and 20 paylines! This is a medium volatility online slot that brings a higher than average Return to Player of 96.2%.

Also, we must mention that players expect valuable prizes and an unforgettable iGaming experience, and the luckiest ones can win up to x5,000 the stake!

In addition to the main members of the band, the symbols you will encounter include low-paying ones such as J, Q, K, and A.

Catch the Rhythm and Go!

If you thought that was all, check again! The slot offers unforgettable entertainment after joining the game with the hit songs With Wild Side, Live Wire, and Girls, Girls, Girls!

Play’n GO will also give you the opportunity to take advantage of the Bonus Spins feature, which will be activated after 3 scatter symbols come into view! This feature can bring you 6, 7, 8, 9, or 10 bonus spins!

Also, this feature unlocks the fourth hit, Shout at the Devil!

“We’re so proud of this title. Mötley Crüe is a prime example of how we are constantly and consistently taking our games to the next level.”

“The features in this game are epic. I mean Girls, Girls Girls alone puts players in a music video, how many slots can say they transform into an interactive music video?”