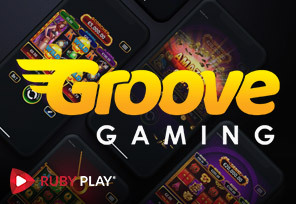 Groove, one of the most well-known platforms in the iGaming industry, at the end of the last year, expanded its network of partners thanks to the collaboration with sports betting supplier Betby. However, the brand intends to further expand its business roots with new collaborations, but also to preserve old partners, as evidenced by the latest news.

Namely, this popular aggregator announced that the company has successfully extended its existing agreement with the well-known and premium brand RubyPlay.

RubyPlay is one of the most famous slot studios in the industry, which has plenty of extraordinary products in its portfolio and has so far concluded over 600 deals with casinos over the world. The titles of this company can be accessed by millions of players across the globe.

Online casino releases of this renowned provider have proven to be some of the most sought-after and fan favorites. One of them is top-tier Mayan Cache.

The Mayan Cache is a video slot whose grid is made up of 5 reels and 3 rows. If you decide to check out this interesting title you will be able to explore interesting features including Bonus Spins, Super Bonus Spins, and Jackpot Mania.

Also, players will soon have the opportunity to explore the soon-to-be-launched Golden Forge, as well as Diamond Explosion 7’s.

RubyPlay is also very famous for its “shake-shake” feature which can be found in the Shake Shake Leprechaun title. All you have to do is shake your phone to collect various prizes from the rainbow!

Grooves’ portfolio consists of over a thousand developer titles by premium providers around the globe. The latest agreement between aggregator and RubyPlay will see a continued distribution of developer titles in partnership with Groove!

Daniel Louie, Game Designer at RubyPlay, said:“Our new‘ mobile-first approach to game design is playing out in titles such as Roman Legend which also has a novel game mechanic. The main character, a Roman Centurion, grows in size on-screen as the game progresses, occupying more and more of the screen, and visually underscoring the growing excitement of the player. This is a good example of how we as gamblers make games for other gamblers.”

Yahale Meltzer, COO at Groove said: “RubyPlay matches our ambition to bring high-quality products to the portfolio, strong performers that are fresh and packed with great features such as Jackpot Mania. RubyPlay has a release strategy that makes sense and we should be getting 17 new titles from them alone this year.”

The post Groove and RubyPlay Extend Its Previous Deal! first appeared on RealMoneyAction.com.