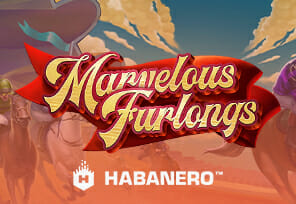 Habanero, a premium developer of slots and table games, is providing players a galloping experience in the latest title, Marvelous Furlongs.

The brand-new game is inspired by the equestrian calendar, taking players through races to prepare themselves for the Marvelous Race Day – the most famous event on the racing calendar.

The game includes a layout of 5×3, with high volatility and different features, such as Wild and Scatter symbols. There is also an Extra Game feature that can deliver up to 50,000x the player’s bet. Each spin in the game brings the player closer to the Marvelous racing event, allowing them to trigger massive payouts and Royal Enclosure.

Marvelous Furlongs is a perfect choice for players who are passionate about horses and races. The game is rich in animation while also including a Calendar Feature progression.

“We are delighted to announce the launch of our latest title Marvelous Furlongs, a season-long adventure that culminates in a final race day that is packed with big win potential.

“With a graphical style and theme that will attract players of all demographics, there’s no reason to miss out on all the unique elements that make up this horse racing-inspired adventure. We’ll see you at the finish line!”

Recent Steps from the Provider

Habanero has recently closed a deal with 888casino to enter the Spanish market. Based on the new deal, players in Spain and Italy will get access to a selection of the titles, such as Hot Hot Fruit, Wild Trucks, and Egyptian Dreams.

Speaking on the new release, Habanero’s head of European business development, Arcangelo Lonoce said that joining forces with such a famous operator as 888 will strengthen their reputation as one of the leading providers. The brand has already secured a string of agreements with top-tier suppliers and will continue to extend its presence even more.

Habanero has already expanded its foothold in the Spain-speaking region by signing a deal with Emara Play to launch its games via the LatAm platform.

Habanero is a cutting-edge provider of slots and table games for the iGaming market. It features more than 100 games that are certified in 16 markets. The company offers titles in 28 languages, with different currencies including crypto payments. It holds licenses from the Malta Gaming Authority and Romanian Gaming Authority as one of the most reputable providers in the market.