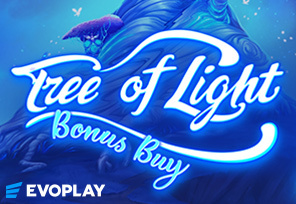 After the great success of Tree of Light, an online slot that was developed in December 2020, Evoplay, an award-winning software provider, presents its sequel – Tree of Light Bonus Buy.

The online slot takes place in the enchanted forest of Windland, where the main protagonists, the brave mouse Lupine and his loyal assistant Mino, take punters on a quest to the legendary tree on which the delicious prizes grow!

On their way, they search for a magic scroll that gives them the power to help you win the main prize, which is 1,800x the stakes!

This very vivid game with superb graphics, consists of 8 regular symbols, while the highest one, represented by the magic owl brings 15x the stakes for a winning combination of 5.

What about the special symbols?

The first special symbol in the online slot is the wild, which substitutes all other symbols except the Scroll symbol. The wild symbol can appear during the bonus round, or in the Random event during the base game.

The Random event can be activated in the base game only, and this feature is triggered when the mouse, Lupine, finds a question mark on his way to the magic tree. When the question mark is in front of the grid, 2 low-paying symbols will be turned into wilds, which will help in creating winning combos.

Scroll symbols can also be found outside of the grid, and 1 Scroll symbol in the base game triggers 7 Bonus Spins!

Choose one of three Fruits!

At the beginning of the bonus feature, players have the option to choose one of 3 enchanted fruits from the Tree of Light, and each fruit contains a certain multiplier – between 2 and 4, which is applied to the total win.

Tree of Light BonusBuy is enhanced with another exciting feature. As you can guess, it is ‘Bonus Buy‘, which allows players to purchase the bonus round for the amount of 42x the stakes.

This excellent online slot is powered by Evoplay’s recognizable engine – Spinential, which produces 10x faster load times, an enhanced UI, autoplay feature and game history, through which players can track their gaming session.

Commenting on the launch, Ivan Kravchuk, CEO at Evoplay, said: “We are thrilled to welcome our players back to the mystical realm of the Tree of Light, with the original game being so well received and enjoyed since its launch that we had to kit it out with new features.

“Ready to be live across our major European markets, we’re sure that the welcoming characters and otherworldly nature of the game are going to be a delight for players – combined with our fantastic new Bonus Buy feature, it’s doubt going to be a real action-packed hit.”