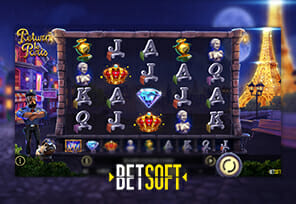 The fight for treasure in Return to Paris from BetSoft begins on the dark streets of Paris, full of shops, and adorned with a beautiful, decorative mess and bench. In the background, we can see the Eiffel Tower in the distance, and there will be a grid on the adjacent fence. It is made up of 5 reels and 4-5 rows and is complemented by symbols stolen from the museum!

Low-paying ones are in the theme of cards while high-paying symbols are busts, vases, crowns, statues, and diamonds. You will have 20 paylines in this slot, but many more interesting details await you below!

What wins are in store? Lucky players will have a chance to win 1056x the bet!

What Else is This Game Hiding?

Each time a thief appears on the grid, he will steal one of the adjacent symbols and put it in his symbol collection. Every time a police officer shows up, he will take those symbols from the thief and return them to the museum!

Both the policeman and thief symbols can appear on the board at the same time, but a maximum of one symbol each. The fight must be fair play!

If they are found next to each other, both symbols will explode and all adjacent symbols, as well as themselves, will turn Wild!

However, the Mona Lisa, which has already been stolen from the museum several times, is again in the hands of thieves. It plays the role of a scatter symbol and can appear on reels 2, 3, and 4. If three Mona Lisa symbols are found on the grid, free spins will be triggered.

Anna Mackney, Head of Account Management, Betsoft Gaming, said: “Betsoft Gaming has surpassed even its own legendary cinematographic skills with Return to Paris

. The incredible attention to detail makes this release fresh with every replay. The atmospheric soundtrack, with its Parisian street music, sirens, explosions and humorous mutterings, reinforces the theme fantastically well. This release sets a new bar in iGaming content and we anticipate a very positive response.”

The post Help the Police Save the Treasure of Paris from Thieves in BetSoft Slot Return to Paris first appeared on RealMoneyAction.com.