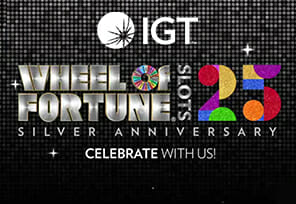 International Game Technology (IGT), the leading technology company in the iGaming industry, and Sony Pictures Television, have announced the 25th anniversary of Wheel of Fortune, the high-performing, fan-favorite slot game.

The title was originally launched by IGT in Reno, Nevada in 1996. The title quickly became popular, becoming synonymous with jackpots, winning and fun, all around the world.

The title has awarded more than $3.3 billion in jackpot prizes during its 25-year history. IGT recognized its potential and has released more than 250 versions of this popular slot. It is even more iconic, having awarded a record-setting $14.4 million jackpot in 2009, to a lucky player in Biloxi, Mississippi.

Representatives from Sony Pictures Television say that the title’s ability to entertain and bring fortune to players is perfectly aligned with the brand and that they are thankful to IGT for producing the most successful slot theme of all time.

Representatives from IGT, which recently expanded in North Dakota, say that Wheel of Fortune slots are a hallmark of the developer’s gaming portfolio and that they are proud about the fact that their title has become a pop culture icon.

“Wheel of Fortune Slots are a hallmark of IGT’s gaming, lottery and PlayDigital product portfolios and have transformed the entire gaming industry on the merit of tremendous performance, vast player affinity, colossal jackpots and quality entertainment. Through the skilled work of thousands of talented IGT employees around the world and our collaborative partnership with Sony Pictures Television, IGT’s Wheel of Fortune Slots has become a pop culture icon that has helped fuel our customers’ success for 25 years,” said Renato Ascoli, IGT CEO Global Gaming.

International Game Technology (IGT) is a global leader in gaming, listed on the New York Stock Exchange. The company is headquartered in the United Kingdom, with offices in Rome, Las Vegas, and Providence, Rhode Island. The company currently has over 12,000 employees across the globe. The brand enables players to experience their favorite games across all channels and regulated segments, from Gaming Machines and Lotteries to Interactive. The company is regulated in more than 100 countries around the world.

The team’s is to drive the global gaming entertainment industry for player engagement and growth by focusing on content and platform technology around delivering an outstanding player experience. It is dedicated to operating its business responsibly and their goal is to create value for all our stakeholders.