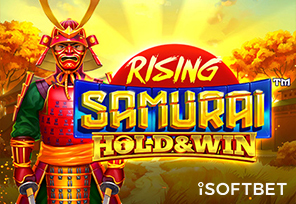 iSoftBet, a UK-based developer of premium online releases takes you on a trip to Japan where you will get to know the culture of this nation and socialize with legendary samurai. These amazing warriors can bring you a life-changing sum of money if you embark on an adventure with them in Rising Samurai: Hold & Win! What are you waiting for?

The grid is nestled in a small Japanese garden surrounded by blossoming Japanese cherries. It consists of 5 reels and an unusual arrangement of rows 3-4-4-4-3 that can be extended to 3-6-6-6-3. This medium volatility online release contains 576-3087 ways to win, and the maximum win you can reach is x16215 the stake. Not bad!

The theoretical Return to Player is a shade above the average and is 95.98%.

Beautiful symbols will make this game even more interesting, and they are made up of low-paying ones that are card-themed A, K, Q, J, and 10, but also of high-paying ones – blue, purple, green, and red Samurai.

iSoftBet surprised us with its many interesting features in its previous online release The Magic Orb: Hold & Win, and Rising Samurai: Hold & Win is no less interesting!

The Wild symbol is presented as a Shuriken and he will replace all symbols during the game except gold coins and Bonus Spins symbols.

Samurai Boosters symbols will only appear during bonus spins rounds and the Rising Samurai Respins feature.

The well-known Hold & Win mechanics are often found in iSoftBet’s releases, as is the case here. To activate this feature, it is necessary to manage to land at least 5 gold coin symbols during the base game. The punter gets 3 re-spins, and the number of them will be restarted each time a new symbol appears. This feature can bring you one of the jackpots including Mini, Major, Maxi, and Grand.

Another interesting thing is that 10, 12, or 15 bonus spins are awarded if 3 or more Bonus Spins symbols come into view. This feature will see an expansion of rows!

Mark Claxton, Head of Games at iSoftBet, said:“Rising Samurai sees us steering the Hold & Win offering in a new direction by drawing inspiration from Japan and the ways of its noble warriors. The title goes above and beyond in terms of the impressive number of modifiers and special symbols it provides, giving players every chance of landing an impressive win while they enjoy the exceptional graphics and animations on display.”