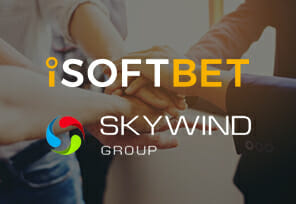 iSoftBet, one of the leading providers of online casino content and aggregator, has inked a partnership with Skywind Group to power its GAP platform with new slots.

Skywind will be another partner to join the iSoftBet’s Game Aggregation Platform (GAP) that supplies the most established operators with more than 8,000 games from 70 studios.

Established in 2012, Skywind has a rich portfolio of more than 350 titles and robust promo tools that have been utilized by some of the most established brands in the globe.

iSoftBet’s GAP is a powerful and scalable platform that has enabled some of the leading brands to enter the newly regulated markets. The brand is already known for an extensive portfolio which consists of Megaways

and Gold Digger, one of the top-performing releases by the brand in recent years, contributing to a 60% increase in bets compared to previous hit releases.

The agreement with Skywind Group comes right after several deals with leading brands such as EGT Digital, SkillOnNet, and Rootz.

“We’re always looking to add more quality products to our industry-leading GAP content and partner studio portfolio, so we’re delighted to announce our partnership with Skywind, one of the most significant content developers of the last 10 years.”

iSoftBet has also just announced its new slot release. The brand has bolstered its suite with Hot Spin Megaways

, coming with up to 117,649 ways and a classic fruit theme. Everyone who joins the game will relish cascading wins, random modifiers, and similar features. With the activation of a Hot Spin occurs, the spinning wheel will provide players with 10 modifiers, which can involve Wild Reels, Mystery Symbols, In-sync reels, Wilds, Max Megaways, or the bonus round.

If you are lucky to trigger 4 or more scatters on the reels, you will be transferred to an interactive experience with the opportunity to choose starting spins and multiplier levels as well as a mystery combination. The game also features the bonus spins mode with more explosive modifiers such as Multiplier Boost, Max Megaways, Random Wilds, Mystery Symbols, and Symbols Removed.

iSoftBet is a world-class provider of online and mobile casino content to the industry. Its portfolio consists of 150+ proprietary slots and table options as well as a selection of 8,000+ third-party games available via the GAP platform.