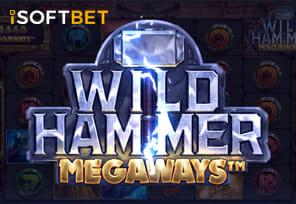 iSoftBet, one of the leading online games suppliers and aggregators of content, has announced the launch of its latest title, Wild Hammer Megaways

The title features a Norse theme, and players journey to Asgard with the God of Thunder, Thor. The player is taken on an adventure filled with wins in this 117,659 ways to win hit title.

The reels feature famous Norse deities such as Odin, Loki, Freya, and the wolf Fenrir. Players will also see Thor’s legendary hammer, Mjolnir, which is the wild symbol. Players stand to win up to 50,000x the bet.

If two or more symbols match on the reels, they turn to wild symbols and every symbol in the column turns into wilds, providing huge win potential.

Representatives from iSoftBet, which recently secured and agreement with Skywind Group, say that this title coupled with their mechanic will provide loads of excitement to the players and that they are always looking to add innovative content to the market.

takes an engaging theme and adds the power of Megaways

to it, for heroic win potential. Coupled with our matching mechanic, any spin could turn into one of truly God-like proportions as entire reels turn wild.”

“We’re always looking to bring exciting, innovative content to the market for our players and we’re delighted to bring the matching mechanic back in a way that we’re sure will thrill our fans!”

is the latest title in iSoftBet’s extensive games library. The supplier’s portfolio is filled with innovative and popular Megaways

, which was awarded the Game Narrative category at the CasinoBeats Game Developer Awards.

iSoftBet is one of the leading online and mobile casino games suppliers. The company is able to provide operators with one of the largest and most successful games with its Gaming Aggregation Platform. iSoftBet is licensed and certified to operate in over 16 regulated markets, such as the United Kingdom, Alderney, Belgium, Croatia, Estonia, Hungary, Italy and more.