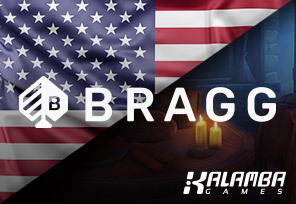 Kalamba Games, one of the leading iGaming software providers in the industry, stated that the brand has further expanded its existing, long-term partnership.

This popular provider recently announced a partnership with the well-known operator, LeoVegas. The deal between these two giants enabled the provider to leave its footprint on multiple key markets across the globe.

However, Kalamba is now turning its focus to another popular market!

The provider announced that it has once again shaken hands with its long-term partner, Bragg Gaming Group, to expand its business roots to the US iGaming market. The agreement between these two companies will see the launch of selected Kalamba products in the US market but also in Ontario, Canada thanks to Bragg Gaming Group’s remote game server (RGS).

In the contract, it was concluded that the distribution will include multiple well-known and feature-packed titles that have delighted punters all over the world in a short time. Punters from the US as well as players from this Canadian province will have the opportunity to engage in their favorite form of entertainment with the fantastic Firedrake’s Fortune, hit title Gates of Babylon, incredible slot Griffin’s Quest, and much more.

Kalamba Games Chief Commercial Officer, Andrew Crosby, said: “We are focused on continuing the incredible growth that we have seen this year and our entry into the regulated markets in the US is a landmark in our expansion. The US iGaming market as a whole has been on our radar for some time, as it offers great potential for both ourselves and the industry as a whole. Thanks to our long-standing and successful partnership with Bragg’s ORYX Gaming, we can now bring our premium entertainment and engaging titles to these new audiences for the very first time.”

Kent Young, President Americas at Bragg Gaming Group, commented: “We’ve enjoyed a successful partnership with Kalamba over the last five years as their iGaming content has proven to be in demand with players. We are pleased to now be able to leverage our data-driven insights into player preferences to strategically introduce Kalamba titles to expand the scope of content we offer across North America…”

Bragg Gaming Group is a well-known B2B brand that was established in 2018. Although a relatively young company, Bragg managed in a short time to break through to the top of the ladder and become one of the leaders. This fast-growing provider has so far left its presence in several markets across Europe, North America, and Latin America.

The company holds multiple licenses that enable the brand to operate in several jurisdictions including the UK, the Netherlands, Greece, Switzerland, and the Czech Republic as well as the latest guaranteed supplier license for the Bahamas.

The developer is also present in Nevada via its popular Wild Streak Gaming brand, which provides products for land-based, online, and social media casino operators across the US and the UK.