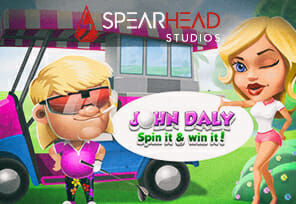 If you are a golf fan and you want to take part in a competition against one of the best, then you are in the right place! Well-known casino software developer, Spearhead Studios, has rewarded its clients with a new online golf-themed online slot in which you will meet the legendary John Daly – John Daly: Spin It And Win It.

The grid is located on one of the golf fields and consists of 5 reels and 3 rows as well as 243 ways to win. If you decide to try high volatility online title, you will be given the opportunity to take home over x20,000 of your stake! Isn’t that tempting? The theoretical Return to Player is lower than average and amounts to 94.78 per cent.

Interesting Symbols Will Delight You!

The low-paying symbols that will appear on the grid during this online game are card-themed and they are A, K, Q, J, as well as 10. However, the developer has come up with very interesting high-paying symbols. They are made up of a green golf car, a package of soda, a colorful lion, and John Daly himself. Also, players will have the opportunity to get acquainted with the Wild symbol as well as the Bonus symbol.

During the base game, several special symbols can land on the grid, including regular Wild, walking Wild as well as expanding wins modifiers. The Wild symbol will help you create more winning combinations during the game. Wondering how? This symbol will replace all symbols except the Bonus symbol.

If you decide to try this online slot, you will also be introduced to plenty of features including the Free Spins feature, Sticky Balls, but also John Daly’s Big Hit.

On the left side of the screen, the player will notice a small icon that looks like a basket – John Daly Spin It And Win It. This option offers you the opportunity to buy Random Wilds, Expanding Win, Walking Wild, Bonus Feature, Big Swing feature, Free For All, or Sticky Balls.

Kevin Corti, Game Development Director at Spearhead Studios, comments: “John Daly: Spin It And Win It is our new marquee game. It is by far the most feature-rich title we’ve ever produced, crazily volatile, and with no less than eight buy features. More so, the ability to gamble their bonuses gives players unparalleled control over how they want to play.”

More About this Slot Hero

John Daly is a professional golfer born in 1966 in California. So far, he has won several of some of the most prestigious competitions. The PGA Tour has won as many as five times, five European Tours, two Sunshine Tours, one Asian Tournament. In 1991, he won the PGA Championship, and during his career, he was better than Tiger and Charlie Woods at Grande Lakes in Orlando, Florida.

The post Meet the Golf Legend in Title from Spearhead Studios – John Daly: Spin It And Win It first appeared on RealMoneyAction.com.