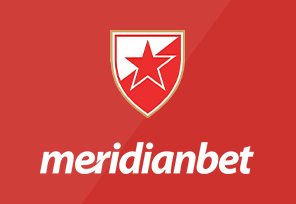 Meridianbet, one of the most popular and fastest-growing operators in the Balkan and beyond, announced that it has made another major move in the form of a sponsorship deal with BC Crvena Zvezda!

Several times during the year, Meridianbet concluded significant partnerships that contributed to the company drastically expanding its offering with titles from popular casino software developers in the industry, including, as of a few days ago, Red Rake Gaming.

This latest deal for Meridianbet allows it to further strengthen its presence in one of the leading markets, Serbia!

Via its sponsorship agreement with one of the strongest sports clubs in the country, BC Crvena Zvezda (Red Star), Meridianbet will become the shirt sponsor and official betting partner of the club. Namely, it will sever as the sponsor of the club at all home matches from now on.

The partnership marks an important milestone for the company, which will further strengthen its position in this ever-growing market and further engage in the world of basketball! Additionally, Meridianbet will additionally promote the club with its communication channels, but also contribute to the development of basketball in this region.

“The sponsorship also marks a major achievement for BC Crvena Zvezda, as the club continues to build on its success in the Euroleague. With the support of Meridianbet, the club will be able to further enhance its performance on and off the court, as it strives to achieve even greater heights in the world of basketball,” according to the source.

As we have already mentioned, Meridianbet is one of the best-known operators in the industry, which can boast of its presence in several key markets in Europe.

The casino features a wide library of titles made up of plenty of releases. Among the developers who brought their titles to this operator’s platform was BF Games.

Just a few days ago, the company joined forces with this giant in another significant distribution deal. BF titles became available to the platform’s clients!

The post Meridianbet, An Official Sports Betting Partner and Shirt Sponsor to BC Crvena Zvezda! first appeared on RealMoneyAction.com.