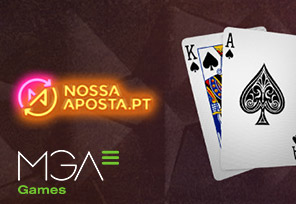 MGA Games, one of the well-known developers of localized slot releases, has announced that the company will once again enter the Portuguese market after last year’s debut with 888Casino.

Namely, 2022 will be remembered for the developer’s cooperation with the Lisbon-based operator, Nossa Aposta. The deal will allow MGA Games to step into the popular market, which will further impact the company’s global expansion plan.

This agreement will also expand the supplier’s global reach, which will significantly improve MGA Games’ position in the iGaming industry and Portuguese players are in store for unforgettable experiences. The products are engaging, interesting, and contain innovative features that will easily win the hearts of punters.

On the other hand, the operator, which also recently teamed up with Red Rake Gaming, will drastically expand its offering while strengthening the trust of its customers by giving them access to some very popular games.

Nossa Aposta is a well-known brand in the industry for its numerous partnerships with some of the leading companies in the iGaming world, which is of great importance for the advancement of operators. This operator is owned by Cofin, a brand known on the stock exchange list.

According to MGA Games management, “We are delighted to welcome Nossa Aposta as a new partner. We are a high-performance provider of location-based games, and we are sure that Nossa Aposta players will greatly appreciate the quality of all our titles as well as our localized product: Portuguese Celebrities slot games such as Paulo Future, Ana Catharina, Chef Chackall, among others.”

However, That’s Not All!

This deal brings much more than we expected. In addition to distributing fantastic titles, clients will be able to take advantage of “personalized attention from the accounts team” as well as various marketing expedients including promotional tools. Clients will be able to find these tools in their “Client Zone,” which will give them the opportunity to stay informed about multiple promotional actions throughout the year.

MGA Games is a well-known company in the iGaming industry that was established in 2001. It is headquartered in Cerdanyola del Velles, Barcelona, and is focused on producing innovative games. The provider celebrated its 100th title at the end of last year and also announced that in 2022 we will see plenty of amazing products.

The post MGA Games Now Available in Portugal Thanks to Agreement with Nossa Aposta first appeared on RealMoneyAction.com.