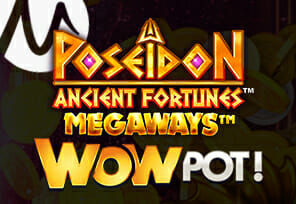 , just days after its launch, has hit for €3.8 million, paying a massive prize.

A player from Sweden, playing at Videoslots, struck the top WowPot jackpot on 23 August 2021, just four days after the launch of Ancient Fortunes

The title was exclusively developed for Microgaming by Triple Edge Studios. The title features a Greek mythology theme and is the first slot title to include Big Time Gaming’s trademarked Megaways mechanic and the WowPot progressive jackpot, which went live in February 2021.

This WowPot win is the second largest in the jackpot’s history, with the amazing €17.529.047 hit being the largest. The largest hit happened on April 14, 2021 and it was the fourth WowPot jackpot to make a millionaire.

So far in 2021, Microgaming’s progressive jackpot network has awarded 2.6 million wins across all jackpots, tiers, and games, which is over €143 million in total.

Representatives from Microgaming, which recently unveiled its September releases, say that it is amazing to see another massive WowPot win and that they congratulate Videoslots on this impressive payout.

was released network-wide to our customers. Congratulations to Videoslots on this impressive payout, and to their player in Sweden,” said John Coleman CEO at Microgaming.

Officials from Videoslots, which recently integrated Spinomenal content, say that they are thrilled to provide players with access to Microgaming’s progressive jackpot slots and they are beyond excited about making a player a multi-millionaire.

“We’re thrilled to provide our players with access to many of Microgaming’s legendary progressive jackpot slots – and even more so that one of our players has taken home the latest WowPot win, becoming a multi-millionaire,” said William Ahlberg, Head of Commercials at Videoslots.

More About the Supplier

Microgaming is one of the pioneers in the iGaming industry. The company developed the world’s first online casino back in 1994 and the first mobile casino software in 2004. The company has headquarters on the Isle of Man, which opened in 2017. The team at Microgaming genuinely cares about iGaming, its operators, and players. Its products include casino, poker, bingo, sportsbook, land-based and live dealer games.