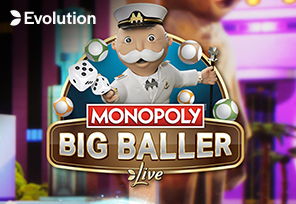 Evolution has announced the launch of MONOPOLY Big Baller, a long-anticipated live casino show based on the world-famous board game. The latest release takes players on a riverboat voyage where the action is centered around a bingo-style ball drawing machine, offering a totally new online gaming experience. Jump aboard and let Mr. Monopoly take charge of your entertainment enhanced with plenty of excitement and numerous multipliers able to generate staggering payouts.

Being a truly unique game, MONOPOLY Big Baller retains all the familiar elements of its original board variant, containing engaging features such as dice rolls, Chance and Free Space cards, as well as Go To Jail spaces, to name a few.

Test Your Luck Alongside Mr. Monopoly

Last month, Evolution released Gold Bar Roulette to let players make the game of their own, but at the end of summer, the world’s leading provider of live casino solutions brings even more exciting news. The company released MONOPOLY Big Baller, a unique bingo-style game that adds all the thrills of online entertainment to a popular board game.

“MONOPOLY is such a mega brand and the basic premise of the board game is so well understood and loved around the world. MONOPOLY Big Baller packs all of that brand value into a new online live game show that is sure to appeal not only to MONOPOLY and bingo lovers, but also to a new and much wider audience.”

In this engaging game, players embark on an incredibly entertaining riverboat cruise where the action is focused around a catchy machine with bouncing balls. Once the ball drawing starts, 20 random balls are drawn and if the numbers match those featured on the player’s cards, a daub is automatically placed. The goal is simple – to complete as many lines as possible and win multiplied payouts.

Lottery-style casino games are gaining momentum and the huge popularity of Mega Ball released two years ago proves the high demand for this type of entertainment. The highlight of Big Baller is the Bonus game, in which the augmented reality Mr. Monopoly walks around a 3D MONOPOLY board and collects multiplier prizes for players.

“Mr. MONOPOLY is back big time! We have a sizeable segment of players who love bingo- and lottery-style bouncing ball games. Our Mega Ball game, for example, is extremely popular. Now, MONOPOLY Big Baller offers another unique live game show—and one that is visually and thematically very different. And at the heart of this new game is virtually the same great Bonus Round from our original MONOPOLY Live game, but it’s now even better because players get more rolls.”

The post Mr. Monopoly Is Back with a Bang in Evolution’s New Live Game MONOPOLY Big Baller first appeared on RealMoneyAction.com.