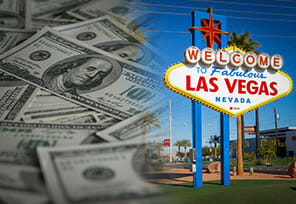 Statistics show that $1.10bn was invested in Nevada in October this year, which is more than the same time last year.

A new sports betting record was set in Nevada at 48.5% to $1.22bn. This revenue increased throughout the state.

In Nevada, it there seems to be bigger successes each month, as this record was preceded with last month’s – $787.6 million, but in any case did not reach the New Jersey record of $1.30 billion. This figure represents the largest amount of money ever invested in a state in a single month.

Betting revenue rose from 14.0% to $48.3 million, which is satisfactory in any case, but the handle was slightly more successful and increased by 66.9% compared to October 2020.

Where Did the Increase Come From?

Most of the betting revenue came from football and was at $32.6m and $729.3m. After football, the second in a row was the famous baseball which brought $4.2m, and then parlay cards which contributed a modest $4.3m.

Sport bettors have invested $703.8m online, and government revenue from sports betting has increased by $16.9m. It was brought by mobile betting.

When we add it all up, compared to the previous year, and when we talk about the same month, revenue in the state of Nevada experienced an increase of 39.8% to $1.22 billion.

Punters have invested $790.4 million more in slots this year, which is about 39.8% more than last October, and this amount makes up the largest part of the revenue. Specifically, punters invested $11.69 billion in slots. The most popular among players were multi-denomination slots which is not uncommon, and they are credited with an increase of $367.6m and the rest was contributed by penny slots with a modest $312.9m.

An increase of 67.8% compared to the previous year can be seen in table, card, and counter game, including sports betting.

Blackjack contributed $115.4m in revenue (up 91.8%), and baccarat was obviously also very popular among punters and contributed $92.4 million in revenue (by 55.4%). However, roulette was the most successful among them, doubling its revenue to $40.4 million.