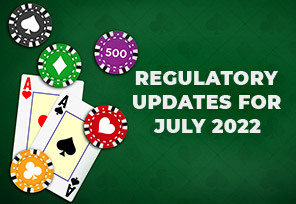 While the United States seems to have slowed down a bit in terms of regulations in land-based and online gambling industries, other parts of the world are working on improving some fields. The most notable progress is made in the responsible gambling sector, with a variety of measures introduced, all aiming to secure a safer gambling environment.

This comprehensive report features all the updates from the US and South America which have taken place in July 2022. It also encompasses highlights from multiple European countries and the most notable changes from Australia.

The United States is putting some efforts to tackle unlicensed gambling on a federal level. A group of 28 representatives appealed to the Department of Justice to identify and close unlicensed offshore gambling companies offering their products and services to locals.

California: Commercial sports betting operators’ initiative to welcome online sports betting was included on the November ballot. Yet, the Democratic Party invited voters to reject the proposal and vote “no”. On the other hand, no recommendations were made regarding the tribal, retail-only proposal.

Florida: According to the announcement made by the Court of Appeals, the case against the tribal operation of online sports betting is expected to start in August. However, a final decision won’t be made until the next year.

Maryland: Draft regulations that aim to approve online sports betting were granted initial approval. They have now progressed to a legislative review commission for consideration ahead of a public review period. Governor Larry Hogan hopes the process could be finished in time for the upcoming NFL season, which begins on September 8, 2022.

Most Significant Regulations from South America

Brazil: As per the amendments to Bill 1153/2019 approved by the Chamber of Deputies, to be eligible to sponsor sports betting teams, sports wagering sites must have an office in Brazil. Also, the Bill defines that 1% of the gross profit for fixed-odds sports betting will be distributed to sports organizations.

Chile: The Commission of Sports and Recreation has received Deputy Marco Antonio Sulantay’s legislation to prohibit the advertising of online sports betting via sponsorship partnerships with local football clubs and leagues.

Peru: The Foreign Trade and Tourism Committee gave its initial approval to the online gambling bill. Aside from featuring details for establishing a regulatory framework for online casino games and sports betting, the bill would also set up measures for player protection. It also determines MINCETUR as the body in charge of regulating both sectors, while the Ministry of Transport and Communications will be responsible for the blocking of unlicensed casino and online sports wagering operators.

Highlights from Europe and Australia

Belgium: According to the legislation which is set to take effect from October 20, 2022, a weekly deposit limit is set at €200. If they meet credit requirements, players can ask for the limits to be removed or request lower limits instead.

Slovakia: The Office for the Regulation of Gambling is working on new standards for advertising aiming to limit the scope of gambling advertisements across all platforms. Also, the same institution published a whitelist of licensed gambling companies to help citizens identify legal gambling sites and avoid unlicensed operators.

Australia: The Government of New South Wales came up with new regulations to ban sign-up bonuses and special odds, noting that ads must not entice people to gamble. It also leveled up consumption taxes on all bookmakers from 10% of the gross win to 15%.

Speaking of taxes, the Government of Queensland increased the rates as well. Starting July 1, 2022, the rates are inclined from 15% of the gross win to 20%. Finally, the ACMA plans to establish a self-exclusion register to cover all online and telephone betting services.