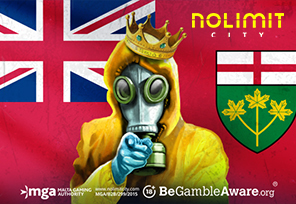 The Ontario market is expected to open on April 4th. Nolimit City, one of the well-known brands in the iGaming industry, announced that the company has guaranteed the necessary supplier license thanks to which the brand will be able to operate in Ontario once the market is launched.

This Malta-based developer has been licensed by the Alcohol and Gaming Commission of Ontario (AGCO), and this thumbs up marks a very important step for the company. Namely, as many as 15 million residents will have the opportunity to try out Nolimit’s products after April 4 this year.

The company also announced that some of its most sought-after and popular online slots will be included in the distribution, including those with xMechanics. Ontario punters will have the opportunity to enjoy Mental, East Coast vs West Coast, Tombstone RIP, and more.

Malcolm Mizzi, CCO & MD at Nolimit City, said in the statement:“We’re over the moon to have been awarded this license and to be recognized as one of the early adopters of the newly regulated Canadian provinces. Our commitment remains firm on being present in as many regulated markets as possible. We love Canadians and they seem to love our games back!”

The new supplier license will significantly improve Nolimit’s growth plan as the company will leave its footprint in another very important market. By expanding to Canada, the developer has also improved its position in the iGaming industry and drastically expanded its business scope in North America.

Nolimit City was founded back in 2014, and is headquartered in Gzira, Malta. However, in addition to this base, the brand also has offices in Stockholm, Sweden, and Gurugram, India. Its team consists of many experts who are divided among these three bases.

The supplier is engaged in developing gambling products that suit both mobile and desktop devices. Its portfolio flexible and can be redesigned to suit any operator.

At the end of last year, the brand took a step towards other key markets. Thanks to a partnership with Betclic, it stepped into Portugal and on that occasion launched its wide portfolio in this country. Also, in the same period, a Romanian license issued by ONJN was guaranteed, as well as a deal with Betflag.IT.

However, already at the beginning of this year, Nolimit City shook hands with Kaizen Gaming and thus left its footprint in Romania.