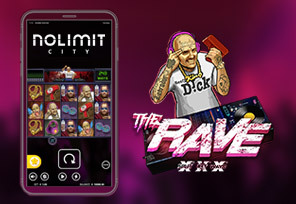 NolimitCity, one of the fastest growing and premium casino software providers, presents you with a new adventure in which you will explore a rave and meet many characters who are looking forward to this exciting event just like you!

The developer recently launched its online title, Folsom Prison, which offers punters the opportunity to take advantage of the high winning potential – up to x75000 the stake, in addition to interesting gameplay!

The Rave features a grid that in the center of the party and is made up of 5 reels, 3 rows, and 243 ways to win. If you decide to join this unforgettable high volatility online event, you will have the opportunity to win up to x41500 the bet! The theoretical Return to Player is slightly higher than average and amounts to 96.05%.

The symbols that will enrich your iGaming experience are made of low-paying ones that are headphones, lollipops, glasses, a gun that launches money as well as several golden necklaces.

Among the high-paying ones were five interesting participants of this festival with backgrounds in the colors green, blue, purple, orange, and red.

3 or 4 ‘Drop the Bass’ scatter symbols will take you to the ‘Murder on the Dancefloor’ feature, and five such symbols will trigger the ‘God is a DJ’ feature.

During these features, you can take advantage of the ‘Mashup!’ which will turn all character symbols into the highest-paying symbol.

On the other hand, Crossfader will convert all low-paying symbols into the Wild and Sidechain links 2-5 reels.

Players will also have an exclusive opportunity to take advantage of xBet and xWays features while exploring this feature-packed online game.

Wild symbols will help you create more winning combinations by substituting all other symbols except the scatter.

Also, the RTP is variable depending on the activated feature.

Per Lindheimer, Product Owner at Nolimit City said: “Welcome to the party that never ends with endless light shows filling the scene and unprecedented possibilities. Feel the groove, and feel yourself move with our in-house music that will bring out your young rebellious side. The Rave is volatile, has tons of features popping up all over on the dance floor, and as soon as the Bass drops, you’re in for a ride…”

Nolimit also recently launched its title Karen Maneater, which quickly became a hit among players around the world thanks to its dynamic gameplay and unique theme.

“Nolimit City gets the party started with The Rave release’’, europeangaming.eu, July 12, 2022.