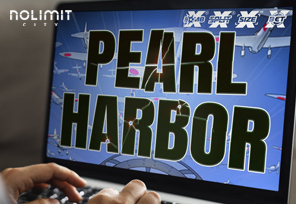 Nolimit City, one of the leading and well-established iGaming content developers in the online gambling industry, which is known for interesting and engaging content, decided to mark this year with a fantastic title that will bring more than you expect.

During 2022, the brand worked hard to provide its clients with fresh content, and plenty of such releases enabled the company to break through to the top of the ladder and guarantee one of the leading positions among popular developers.

Just some time ago, Nolimit presented an exciting adventure called Rock Bottom. However, let’s see together what this popular supplier of engaging content has prepared for us!

Nolimit City announced that the company is ready to launch its latest online casino release during the week, which will look back on history and bring famous characters!

Pearl Harbor is the second in a series of cluster titles that the brand presented to its clients. It was preceded by The Border, who went live in September and on that occasion brought unique fun!

However, Pearl Harbor brings you more than you expect! Players who decide to explore this release can expect plenty of features, popular mechanics, dynamic gameplay, and valuable prizes!

Pearl Harbor features a grid made up of 7 reels and 7 rows. However, only 9 fields will be unlocked which will create a small 3×3 grid. In order to create a winning combo, it is necessary that 5 symbols land in cluster. After you create a winning combo, the symbols that were part of the win will disappear and new ones will come down in their place.

The game features xMechanic, xSize™ which will help you expand the grid.

When it comes to symbols, there are card-themed ones as well as several warriors with green, blue, orange and yellow backgrounds.

This fantastic supplier has announced that the launch of the game is expected on December 7.

Nolimit City, which previously released its Road Rage slot, is a well-established casino software developer known for its games and unusual themes. The brand aims to bring games that will suit every player, but that are memorable and unusual at the same time.

One of the recently presented releases, Little Bighorn, in addition to having an unusual grid setup, brings players the opportunity to guarantee an unforgettable iGaming experience, but also up to x25,676 the stake.

We are impatiently waiting for the new release, and you?