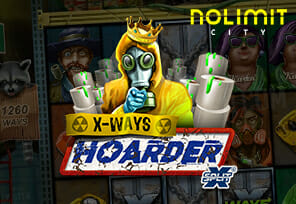 Nolimit City, a specialized provider of slot games and Malta-based studio, is ready to deliver another experience to its players. This time, the brand has announced xWays Hoarder xSplit, shortly after introducing another successful title, Infectious 5 xWays®.

The new title from the company stands out with a 5×3 reel set along with the powerful mechanic, xWays which is paired with an innovative solution, xMechanics, xSplit® Wild splitting symbols. They expand to additional symbols across the same line and increase the number of win-ways on any spin. Players can enter the Bunker Raid Spins bonus by gathering 3 or more scatter symbols. If you land enough sticky xWays elements, you will unlock the level-3 nuclear threat. The maximum possible payout stands at 11,030x the stake.

Speaking on the new product, the Product Owner at Nolimit City, Per Lindheimer, said:

“A game for all you Karen’s out there. An outrageous game with a slightly lower simulated max wins that you usually see from us at Nolimit City – but also with a much more frequent max win ratio– no reason to call for the manager this time!”

What Else Was Released?

Nolimit City has recently added another powerful game to its portfolio, Infectious xWays. The game features a 5×4 reel set with 1024 winning ways, that can increase with added xWays & Infectious xWays. Along the way, you can mee different characters and such as Havoc, Mind Flayer, Torch, Misery & Toxicity. If you land 3 of additional bonus symbols, you will be able to unlock bonuses such as Toxic Hazard & Lock N’ and MAYHEM super bonus. The maximum win potential in the game is 55,555x bet win potential.

Nolimit City is a top-tier studio and provider of innovative casino content, with offices in Malta, Stockholm, and India. The company offers high-quality games and services to operators around the globe. It has developed its platform in-house from scratch delivering a robust engine that can accept large volumes of gameplay and social interaction whether on both desktop and mobile.

Nolimit City is also known for its innovative back office and bonus toolbox, operating as a one-stop shop for its partners. It is a scalable platform and can be adjusted to operator requirements and needs. The company employs the smartest people in the industry and it is also passionate about delivering unique tech solutions.

The post Nolimit City to Boosts its Suite with xWays Hoarder xSplit first appeared on RealMoneyAction.com.