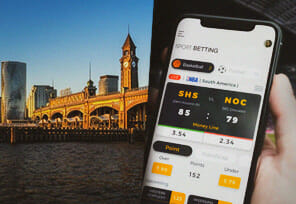 For the second month in a row, the good news comes to us from the state of New Jersey and the sports betting market.

Namely, in this state, for the second month in a row, the record of income from sports betting was broken, as during the month the players invested as much as an incredible $1.29bn. This money was invested in both online betting and retail.

Where Does Sports Betting Income Come From?

The income brought by sports betting this year is higher by 127.1% compared to the previous year and amounts to $114.8m. We can easily notice that this broke the record set in October this year, which was $84.2m.

In online sports betting, players bet as much as $1.14bn, while in retail the stake was $114.0m and thus reached the total figure of 1.29bn in stakes. This represents a growth of 38.5% on a year-on-year rise.

Compared to the handle record set in October, which was $1.30bn, this record is a shade lower.

Two Meadowlands partners, FanDuel and PointsBet, continue to be leaders in the sports betting market with a staggering $64.4m in income. They are followed by Resorts Digital and DraftKings with $ 22.4m, and third place goes to Borgata’s partner BetMGM.

Also, we can’t help but mention the online casino where the income was $118.0m. Last year, this revenue was 28.5% less than this year, which is good news. However, in October this year, the punters invested $127.0m, which is 7.1% more than in November of the same year.

Online slots brought in $115.8m in revenue, and at peer-to-peer poker, it contributed $2.2m in revenue.

The iGaming market was led by the Borgata, which generated $33.7m in revenue, followed by Golden Nugget Online Gaming ($ 31.8m), and third place went to Resorts Digital with $ 27.8m.

To Sum it All Up!

From the beginning of this year to the end of November, the total annual revenue in New Jersey was $ 4.33bn! Unbelievable!

If we compare this year and the same period last year, we would see that this amount is 68.7% of last year’s figure.

The post November, New Jersey: Players Invested As Much As $1.29bn in Sports Betting! first appeared on RealMoneyAction.com.