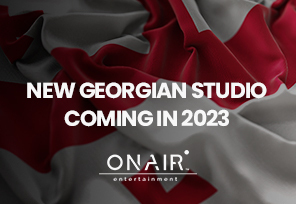 OnAir Entertainment, a Malta-based provider of live casino content, has unveiled plans to build a brand new studio in Georgia. Set to open its doors in Q1 2023, the state-of-the-art production hub will be located in Tbilisi and housed on four floors, having enough space for 130 blackjack and roulette tables. This project will create many new jobs at a local level since it’s expected that the facility will employ between 1,500 and 2,000 people.

Even though OnAir Entertainment appeared on the online gaming scene at the very end of 2020, which makes it quite a newcomer in the world of online casino entertainment, the Georgia studio is already its third production facility. Last month, the company presented its studio in Romania, which is set to start operations by the end of this year.

Tbilisi will become home to a significantly larger number of live dealer tables than its Bucharest counterpart – the four-floor studio should have enough room for 130 English Blackjack and Roulette tables. Needless to say, the well-thought-out design of the new premises is intended to create a unique atmosphere inherent to the most luxurious land-based casino.

“We have quickly become the go-to provider of premium live casino content and the demand for our games continues to increase at pace, which is why we have an ambitious roadmap for new studio launches.

“Our Georgia studio really is cutting edge and the technologies it contains allow us to deliver an unrivaled player experience at all times”.

Since the launch of its first live blackjack table in November 2021, OnAir has made every effort to diversify its portfolio and offer the highest quality of streaming and an ultimate player experience. The Tbilisi studio leverages groundbreaking digital environments and makes use of HD cameras and powerful microphones.

“OnAir’s Georgia studio will be one of the most advanced in the industry and will allow us to further strengthen our position as a tier-one live dealer provider to operators in regulated markets around the world.

While the brand new premises are going to start operations in Q1 2023, many online casinos have already expressed the desire to make OnAir’s content part of their gaming lobbies. At the moment, besides the aforementioned Blackjack and Roulette, the company also offers Live Speed Roulette, with Auto Roulette, Eclipse Blackjack, and 9 Pots of Gold

Edition waiting in the wings.

OnAir Entertainment is present in key regulated markets, including the UK, Sweden, Malta, and Ontario, to name a few. In June, the company entered Denmark, adding one more important jurisdiction and significantly expanding its player base.