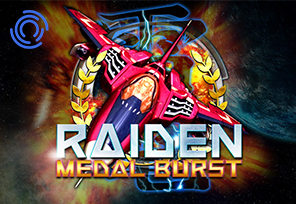 OneTouch, a well-known developer of premium online slots, recently returned from a beautiful safari adventure in which it met Treasures Africa. However, the next trip guarantees you exciting gameplay and valuable prizes!

Made up of 5 reels, 3 rows, and 10 paylines that pay both ways, the grid is located above the beautiful blue sea!

This fantastic online slot will take you back in time. Nostalgia will be enhanced by an audio-visual experience. Raiden Medal Burst will introduce you to several types of symbols including card-themed low-paying ones A, K, Q, J, and 10 as well as four types of unusual aircraft.

Players will also be able to take advantage of the Bonus spins feature which will be triggered if at least 3 or more reels are filled with the stacked Medal symbol. Depending on whether you have completed 3, 4, or 5 reels, you will be rewarded with 3, 4, or 5 bonus spins.

During the bonus rounds, all enemy aircraft will be replaced with the Medal symbol.

The minimum bet players can choose is 0.20 coins, which will suit beginners, and high rollers will surely love the maximum bet of 100 coins.

Also, impatient punters will have the opportunity to try out the fantastic Turbo Mode and Autoplay. However, in some jurisdictions, these two options will not be available.

Madis Raus, Head of OneTouch Games, said: “We’re extremely excited to have launched Raiden Medal Burst, a bold release which encompasses features from the well-known Raiden game series. With an enhanced Free Spins mode, players are in for a treat. We’re confident that the new release will deliver an exciting gaming experience and will resonate highly with players who were fans of the original series.”

This hit title was preceded by the developer’s fantastic medium volatility Fire Combo. This 5×3 online slot offers the opportunity for punters to have fun with beautiful fireworks and win up to x2000 the bet. Fire Combo features Bonus Spins that can be retriggered up to a maximum of 999 in a row!!

OneTouch is a Tallinn, Estonia-based popular casino software developer established in 2015. In addition to this headquarter, the brand has offices in Ukraine as well as, Spain, Malta, and Manila, Philippines.

The provider has expanded its business roots to several key markets across Europe and the Far East. However, brands outstanding and feature-packed online casino releases can also be tried by punters in Africa and Latin America.