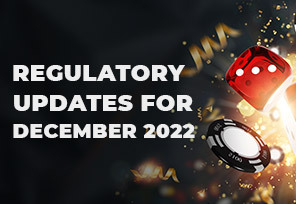 As 2022 is soon to end, we’ve prepared another batch of updates that marked the land-based and online casino industries in the final month of the year. Countries and states which haven’t approved all forms of gambling yet are working on introducing it, while those that already have it are fine-tuning the existing regulations.

You’ve probably noticed that the industry itself is putting lots of effort to maintain the environment safe and well-protected. That’s precisely what marked the final month of the year- more rigorous rules for advertising and bonuses.

Most Recent Updates from the United States

South Carolina: It seems that the state is likely to accept the regulation of casinos, sports betting, and advance deposit wagering on horseraces, as the representative J. Todd Rutherford pre-filed a constitutional bill that aims to authorize all the aforementioned activities. Worth noting is that the bill was pre-filed ahead of the 2023 legislative session.

Brazil: The deadline for signing Bill 846/2018 which aims to regulate sports betting was December 12, 2022, but President Jair Bolsonaro failed to sign it before the said date. As per the original law which legalized this activity, Law No. 13,756, the Ministry of Finance had to pass legislation to regulate sports wagering by the end of the soon-to-end year.

Following the approval issued by the Ministry of Agriculture, jockey clubs are now permitted to offer horse race betting. Until this authorization, the only private company which was permitted to offer this type of wagering was Betsson, via a strategic deal with the Rio Grande do Sul racetrack.

Chile: The Chamber of Deputies prohibited the advertising of sports betting not only in sports events but via any cooperation with clubs and leagues as well. After the Sports Commission in the lower house drafts the final version, the Bill will be forwarded to the Senate for approval.

Netherlands: Aside from increasing gambling taxes to 29.5%, the Netherlands came up with a range of measures for player protection. The local gambling regulator KSA imposed a ban on cashback bonuses and the use of bonuses that aim to encourage consumers to revitalize their dormant accounts. Also, Holland Casino was ordered to remove gambling ads for land-based casinos from its online platforms.

Romania: The local Senate was presented with two bills that aim to decrease gambling ads. As per one of the bills, the advertisements of gambling in public spaces and sending unsolicited messages with gambling-related offers will no longer be permitted. The other bill suggests a complete ban on all forms of gambling adverts.

Switzerland: ESBK and Gespa, the local regulators extended the unlicensed site’s blacklist by adding 64 more domains to it.

The post Overview of Gambling Regulations All Over the World for December 2022 first appeared on RealMoneyAction.com.