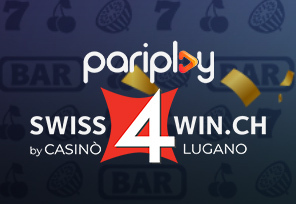 Pariplay, one of the leading online casino games developers in the online gambling industry, has announced it has made another major move that will see the expansion of the company’s global reach even further!

Just some time ago, it joined forces with one of the best-known casino software providers, SmartSoft Gaming, and on that occasion enriched its Fusion platform with new titles!

However, the brand decided to enter into another partnership in order to take a step toward another key European market!

Namely, Pariplay stated that the developer shook hands with one of the choice number one operators in Switzerland and thus left its foothold in this country as well.

Plenty of Amazing Products Available from Now On!

According to the agreement that is sealed between Pariplay and Casinò Lugano, the provider will launch its premium and engaging content on the platform of the partner online brand Swiss4Win.ch.

As stated, Pariplay will launch an array of amazing and feature-packed content developed by Wizard Games!

The integration will be done through the developer’s famous Fusion platform.

Among the titles that you can now find in the operator’s games section are the Phoenix Kingdom, Fisherman’s Bounty, and Amazing Riches as well as much more!

Pariplay has established itself as one of the leading B2B brands in the iGaming industry, and thanks to its Fusion platform, the company has expanded its global reach drastically.

Of the recent move, Andrew Maclean, VP of Sales at Pariplay®, said: “Switzerland is a very important market for us, and the launch of Wizard Games titles onto Swiss4Win.ch is the start of what we believe will be a long-lasting and successful collaboration. We look forward to continuing to serve players with a large amount of new content from Wizard Games’ certified Swiss portfolio. This agreement represents another significant step in our growth journey. “

Paolo Sanvido, CEO and Board Member at Casinò Lugano SA, added:“We are always on the hunt for fresh, engaging content that we believe will prove to be a hit with our loyal players and this deal provides games that fit the bill perfectly. Pariplay® has been creating a major industry buzz for some time now and bringing on board their content serves to significantly strengthen our product portfolio.”

The post Pariplay Goes Live in Switzerland with Swiss4Win.ch first appeared on RealMoneyAction.com.