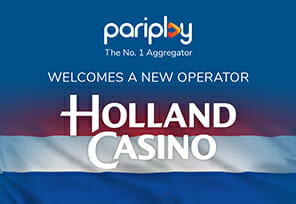 Part of Aspire Global and one of the most established aggregators, Pariplay Ltd, has secured a deal to deliver its proprietary titles to Holland Casino in the Dutch market.

Based on the new deal, 20 of Pariplay’s brand-new and entertaining slots will be available to users at Holland Casino. The latter is one of 10 online gaming operators that received a license from regulator Kansspelautoriteit (KSA) upon the official opening of the market on 1st October 2021.

Apart from getting access to the initial batch of Pariplay games, Holland Casino will also feature additional titles developed by the provider’s expert team.

Holland Casino is known for its land-based operations including 14 gambling locations across the Netherlands. It welcomes 1.1 million visitors every year and represents a leading company in the newly regulated market.

aggregation platform. It is also supporting its Ignite studio partners to receive certification for their games in the Netherlands, together with other 15+ jurisdictions.

Commenting on the newest deal, VP of Sales at Pariplay, Andrew Maclean said:

“We firmly expect the gaming market in the Netherlands to grow to ultimately become one of the biggest in Europe. With that in mind, we are determined to play a major role in shaping the market and this deal with the prestigious Holland Casino allows us to do just that.”

According to his words, the company is seeking to appeal to new players with content that is brand-new, important, and comprehensive. They believe that with the initial selection of certified titles that are available to Holland Casino’s customers, the company will increase the interest for new products which are on the way.

“Pariplay’s content is renowned in the industry for its high-quality production values and with this new content deal, we are continuing to offer our players the chance to experience the best that online gaming has to give.”

Thanks to Pariplay’s knowledge of the Dutch market and customer preferences, the brand is sure that both the first 20 games and those still to come will become popular among customers who want to play in a safe and regulated environment.

aggregation platform and the Ignite Studio development program. Its Fusion

aggregation platform enhances player value by delivering a selection of back-office conversion and retention tools for gaming operators and access to multiple games from established developers.