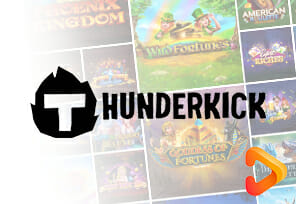 Pariplay Ltd, a famous aggregator and part of Aspire Global, has just added Thunderkick slots to its Fusion portfolio.

Thunderkick is a top-performing games studio that has already made a great impact in the industry, both in the Nordics and further afield, while releasing top games such as Esqueleto Explosivo, Pink Elephants, Fruit Warp, the Beat the Beast series, Carnival Queen, and similar.

Established in 2012 in Stockholm and with offices in Malta and Sweden, Thunderkick has licenses from the MGA, UK, and Romanian suppliers, together with certification for some of the most regulated markets, such as Sweden, Denmark, Gibraltar, and Portugal.

aggregation platform and ready to be launched across additional platforms in regulated markets.

platform already features 1000+ games from the leading developers as well as a collection of back-office conversion and retention tools that increase the player value.

“Independent and proud, we believe Thunderkick’s innovative and beautifully presented content will greatly help operators in the Nordics and beyond attract and retain players.

“We are on a mission with our Fusion

platform to provide the broadest and best possible content offering. By joining forces with Thunderkick, we have certainly boosted our operator partners’ hand with games that are both distinctive and highly entertaining.”

On the other hand, Commercial Director at Thunderkick, Jan Lunde, said that his company is proud of its independent spirit, as well as the distinctive and fresh games that have proven to be powerful and entertaining for customers.

The opportunity to feature games on the new platform means that the brand’s games will reach a wider recognition than ever before, being available in several key markets with leading brands.

Pariplay is a cutting-edge provider of casino games and aggregator. Since its establishment, the brand has been focused on delivering the most innovative products including the Fusion

aggregation platform and the Ignite studio development program. Its Fusion platform consists of thousands of titles from the most powerful developers as well as robust back-office tools.

Pariplay owns a game development studio with more than 120 games in the offer. It belongs to Aspire Group and has offices in different locations such as Malta, Israel, Bulgaria, Gibraltar, and India. The company also holds licenses from the Gibraltar Gambling Commission, the MGA, the UKGC, the Romanian National Gambling Office, and the New Jersey DGE.