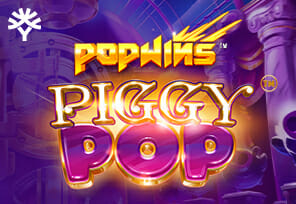 After eight successful releases of PopWins

The grid of this online slot sits among a world of cute, rich pigs. During the game, you will be accompanied by enthusiastic jazz music. The grid is made up of 6 reels and 4 rows that can be extended to 8 rows. It will be decorated with low-paying symbols in the theme of cards A, K and Q, then medium-paying ones which include a perfume bottle, a drink, and a ring. However, the highest-paying symbols are 4 pigs in pink, green, blue, and gold.

Yggdrasil, which recently debuted the first in its Valhalla trilogy, brings you up to 524,288 ways to win in this high volatility game depending on the number of rows. The theoretical Return to Player is 95.5%. If you are lucky, there is a chance to win up to x10690 the bet! The minimum bet is 0.2 coins, and the maximum is 100 coins.

What About the Special Features? Let’s Find Out!

In this online slot you will have the opportunity to meet PopWins, gamble wheel, unlimited free spins, Golden Pigs symbols, a multiplier, and Bonus Buy feature. PopWins – if a winning combination appears on the grid, each symbol that participated in it will split into two parts and then disappear. New symbols will appear in the empty fields instead. Since dividing the symbol increases the number of rows, we must note that if there are no more winning combinations, in the next spin the grid will return to normal. When all reels reach six fields, the Unlimited Free Spins mode will be triggered.

products continue to gain plaudits across our network. It is no secret they are hugely popular games, and we’re delighted to facilitate the launch of yet another landmark game by them.”

Yggdrasil recently released hit title Monster Blox Gigablox in partnership with Peter & Sons, then 5 Clans – The Final Battle, Lady Merlin and many others, and from the second of December onwards new releases await us.

“Yggdrasil and AvatarUX are launching their eighth PopWins

The post PiggyPop Online Slot Brings You a Chance to Win Up to x10690 the Bet! first appeared on RealMoneyAction.com.