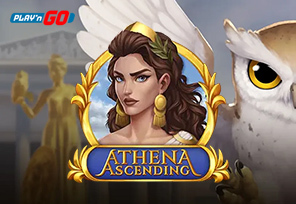 Play’n GO, one of the promising and well-established content providers in the industry, has refreshed the iGaming industry with new online casino releases that will amaze you and bring you unforgettable fun!

Just recently, the brand presented another hit online slot called, Clash of Camelot. This adventure has brought you plenty of engaging features, but also the option to win a life-changing sum of money of up to x35,000 the bet!

But let’s get back to the main topic and see what the supplier has brought us this time!

Athena Ascending is a medium to high volatility online casino release that will take you through the world of Greek Mythology, introduce you to the Gods, engaging features, and beautiful symbols, and also give you the opportunity to win up to x10000 the bet! What are you waiting for?

As we have already said, in this adventure you will get to know various interesting symbols! Play’n GO presents you with card-themed ones as well as a scroll, an urn, a helmet, Pegasus, and Athena herself.

The Wild symbol will help you create more winning combos by substituting all other symbols except the scatter. When it lands, it will bring a 1X, 2X, 3X, or 4X multiplier that can be accumulated up to 64X.

At least 3 scatter symbols are required to trigger the Bonus Spins feature. Then players will be rewarded with 5 bonus spins and every Wild that lands on the grill will become sticky!

Head of Games at Play’n GO, Charlotte Miliziano said:“Not only did we want to capture the essence of the original game, but we wanted to elevate mechanics, audio, and visuals even further. I think what’s awesome about our Greek Mythology slots is that each one of the games spotlights a new hero, narrative, and features. There is something for everyone even within a series, there’s a reason why the Play’n GO portfolio is unmatched in the industry.”

“Witness the rise of a legend in Play’n GO’s Athena Ascending’’, europeangaming, December 1, 2022.